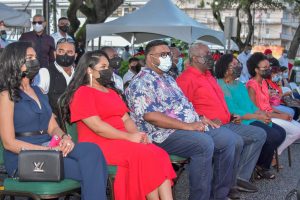 Health Minister Dr. Frank Anthony has called on elected and other officials to stop sending mixed messages in the fight against the coronavirus, COVID-19.

“We have to get everybody to understand the message and we have to get everybody to model the behaviour because once we all do that, we’ll get more people complying  so if we don’t, then we’ll be sending mixed messages so we have to all work together to ensure that the right messages get across because all of us would be affected if we don’t do the right thing,” he said on News-Talk Radio Guyana 103.1 FM/ Demerara Waves Online News.

He issued the call against the background of the fact that a number of government ministers, other elected officials, government employees and the police are violating the COVID-19 measures.

At the commencement of the new Parliament following the declaration of general and regional elections on August 2, 2020,  opposition Parliamentarians Christopher Jones and Sherod Duncan had been cited for unhealthy behaviour by attending  a sitting of the National Assembly although they had been COVID-19 positive. 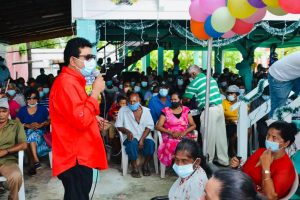 But in his New Year’s Message, the President urged Guyanese to abide by the rules to avoid the spread of the coronavirus. “Wearing masks, sanitising hands, gathering only in small groups, maintaining physical distancing are all necessary to keep everyone safe,” he said. He also called on the Nation to demonstrate “our personal and collective responsibility” to combat the disease.

So far, 166 Guyanese have died from the disease since the first reported case and death in March, 2020.

Police, who are responsible for enforcing the COVID-19 measures, have not been stopping buses from carrying a limited number of persons. The police force has also been allowing large gatherings of persons on the Georgetown seawall not far from its headquarters.

An off-duty policeman was shot early Christmas morning at a party in his home-village of Buxton, East Coast Demerara. Two days later, there was another reported gunplay at another social event at the neighbouring village of Vigilance.

2021-01-05
Denis Chabrol
Previous: Guyana to roll out HIV self-testing
Next: Guyana-born nurse, who vaccinated US VP-elect, denies jab was fake, assures “it is safe”