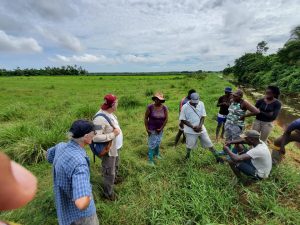 President of the Guyana Human Rights Association, Mike Mc Cormack (first from right) and Director of the Argentine Team of Forensic Anthropology (EAAF) , Dr. Luis Fondebrider talking with several persons concerning the killing and mutilation of Isaiah and Joel Henry in September, 2020.

Thirty-five prominent Guyanese– a number of them in their individual right, or associated with a number of rights and civil society organisations–on Wednesday called on police and the government to accept high-tech forensic assistance from Argentina tin the hope of solving the killing of three West Coast Berbice youths in September.

“We call on the President of Guyana, the Commissioner of Police, the Guyana Police Force investigation teams, and the Minister of Home Affairs to immediately make all efforts to have the EAAF return with a full team to carry out a forensic investigation into the murders of Isaiah and Joel Henry and Harish Singh and to be given full access to autopsy reports and all other evidence collected, including results of investigations so far carried out,” the signatories to a statement said.

They plan to petition President Irfaan Ali to agree to bring in the Argentine team, even as they called on the heads of the diplomatic community in Guyana to make all efforts to support and encourage the Guyana government to allow the EAAF to carry out a comprehensive investigation of the gruesome murders of  the Henrys and Singh.

The hacked bodies of the Henry cousins were found aback Cotton Tree Village, West Coast Berbice on September 6, 2020. Three days later at the height of tensions sparked off by the death of the Henrys, Singh was killed and his motorcycle burnt as he had been heading to his farm at Number Three Village.

Several persons had been arrested and subsequently released, and police have not given a reason why the trousers in which one of the bodies had been found had not been submitted for DNA test.

On Tuesday 15 December 2020, Dr. Luis Fondebrider of the Argentine Team of Forensic Anthropology (EAAF), whose visit to Guyana to offer a preliminary assessment in relation to the murders of Isaiah and Joel Henry and Haresh Singh was coordinated by the Guyana Human Rights Association (GHRA), gave a  public lecture and presentation at the Brickdam Cathedral on the EAAF’s work worldwide.

In the face of marked reluctance by government to accept the assistance from the Argentine Forensic Anthropology Team (EEAF), headed by Forensic Anthropologist Dr. Luis Fondebrider,  the 35 persons noted that the EAAF has the “expertise and experience” to carry out a detailed, scientifically rigorous and comprehensive investigation into the mutilations and killings of the Henrys and Singh based on the best international protocols. “”We call on the Guyana Government and the Guyana Police Force to put the interests of the Guyanese people before all other considerations in sparing no effort to have those responsible for the murders of Isaiah and Joel Henry and Haresh Singh brought to justice and bring some form of closure to the agony and pain their families are enduring,” they said.

The group noted that since early September, all efforts by the Guyana Police Force have failed to produce any clear results and answers to the questions of who carried out the mutilations and killings, where they took place, the motives behind them and who else may have been involved in covering them up.

In apparent reference to racial tensions that had ensued following the killing of the Henrys, the Group of 35 noted that “Guyana is a fractured and divided country and the West Coast Berbice killings exposed the fragility of ethnic relations.” “All right thinking Guyanese must not allow this best opportunity to pass.”

Dr. Fondebrider has already submitted a list of 20 pieces of information that he wants the police force to submit to him. These include the crime scene reports, autopsy reports, maps, pictures and the names of the laboratories where the tests were conducted. He also wants to ascertain whether the Minnesota Protocol on the Investigation of Potentially Unlawful Death  has been followed.

“There is no good reason to impede or refuse the expertise of the EAAF to get to the bottom of these gruesome attacks that took the lives of three youths. Any attempt to do so can only be viewed as callous and lacking in humanity,” the group said.

They said that an additional bonus for Guyana is that the EAAF is ready to offer not only scientific expertise but has also indicated that, in keeping with their practice in other countries which they have worked in, they are prepared to train the Guyana Police Force so that a professional, well trained and resourced Guyanese Crime Scene Investigations unit can be established.

“This expertise is sorely lacking at the moment in Guyana, as has been evident in the many unsolved cases,” they added.

The Group of 35 also heaped criticism on the police force for the alleged violation of the human rights of the Henry cousins while they were returning home from Dr. Fondebrider’s lecture at the Brickdam Cathedral because one of them did not have his driver’s licence in his possession. Both sides have accused each other of assault and the Henrys have since been charged with several related offences. But the group believed that the police could have acted humanely in the circumstances.

“The failing to address such a simple matter by the Guyana Police Force and the callous treatment meted out to members of the Henry family show more than ever the need for the services of EAAF and the imperative of professional training for the police force at all levels,” the group said.

2020-12-23
Denis Chabrol
Previous: Opposition refuses to sit in dome with potentially COVID-positive govt MPs- Mahipaul
Next: Two arrested in connection with seizure of variety of drugs