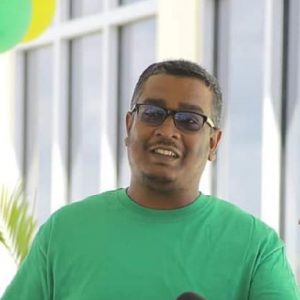 The opposition A Partnership for National Unity+Alliance For Change (APNU+AFC) on Wednesday justified its decision to attend sitting of the National Assembly virtually from  a room at the Arthur Chung Conference Centre, Liliendaal, Greater Georgetown because several government parliamentarians have been violating COVID-19 measures.

Lawmaker, Ganesh Mahipaul said he and his colleagues feared being in the Centre’s dome with the government ministers who have been pictured at housing lands distribution and Christmas Tree light-up events. “I’m  happy, Sir, that this virtual mechanism is in place for us because we, and I can tell you, that we are scared to sit in that dome with those members because they are the ones that are galavanting across the country and we don’t know if they are COVID positive or not; we don’t know if they are asymptomatic; we don’t know that. We are scared Sir,” he said in contributing to debate on a government-sponsored motion about the COVID-19 virus.

Following visibly passionate concerns by Governance and Parliamentary Affairs Minister Gail Teixeira that the opposition parliamentarians were participating virtually from a room at the Centre, House Speaker Manzoor Nadir earlier Wednesday decided that if that happens again, they would be barred from participating in the sittings.

Mr. Mahipaul said APNU+AFC opted to participate in the proceedings virtually from a room at the Arthur Chung Conference Centre because there is good Internet access and at the same time to collect relevant documents that are being circulated. “More so, I am happy to tell you that we are here as a team of negative COVID-19 people,” he said.

The opposition MP  assailed the government for holding Christmas parties, Christmas tree light-up, delivering presents and handing out house-lots without any regard to the wearing of masks and abiding by Social distancing rules of at least six feet from each other. “You need to practice what you preach,” he said.

Mr. Mahipaul singled out Junior Public Works Minister Deodat Indar and Minister of Education Priya Manickchand. The Attorney General and Minister of Legal Affairs Anil Nandlall has been holding weekly meetings with persons standing and sitting close to each other.

Earlier in the debate, Health Minister Dr. Frank Anthony urged Guyanese to abide by the COVID-19 measures to avoid a spike in the disease through community spread.

To date, 162 persons have been killed by the disease.

The Health Minister skirted current concerns by APNU+AFC , but instead recalled that two COVID-19 positive opposition parliamentarians had attended a sitting of the National Assembly at the Arthur Chung Conference Centre,

Both the government and the opposition have criticised each other’s measures to combat the diseases. The People’s Progressive Party Civic-led administration has said that since coming to office on August 2, 2020 testing capacity has been improved and new treatment protocols that are being guided by international best practice.

On the other hand, APNU+AFC boasted that had implemented several measures including curfews and cleaning of buildings.

2020-12-23
Denis Chabrol
Previous: Parliamentarians at Arthur Chung Centre but not in dome will be blocked from virtual participation
Next: 35 prominent Guyanese pressure govt to accept Argentine forensic help for probe of West Berbice killings