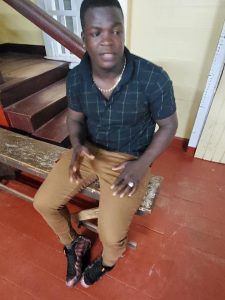 The mother and brother of Joel Henry-one of the youths who were killed and mutilated in the West Coast Berbice backlands earlier this year- were arrested, amid claims and counter-claims of  assault,

Attorney-at-Law Nigel Hughes produced pictures on his Facebook page showing that Colwyn Henry’s mouth was bloodied and he was shackled to a seat at the Sparendaam Police Station, East Coast Demerara. Mr. Hughes alleged that Mr. Henry was assaulted by police and locked up after he failed to produce his actual drivers’ licence but instead showed a picture of the document on his phone to policemen.

However, Guyana Police Force spokesman, Assistant Commissioner Royston Andries-Junor countered, saying that lawmen were assaulted. “Initial information from the Commander is an assault on the ranks by the Henry family,” he told News-Talk Radio Guyana 103.1 FM/ Demerara Waves Online News.

Mr. Hughes said Joel Henry’s mother, Gail Johnson, was was arrested and fainted twice while in custody. The lawyer said Colwyn Henry forgot his licence at home because he was rushing t0 the Roman Catholic Cathedral of the Immaculate Conception, Brickdam for Argentine Forensic Anthropologist Dr. Luis Fondebrider’s lecture. “Despite the intervention of his lawyers and GHRA he remains injured and in custody,” Mr. Hughes said.

A driver not in possession of his or her licence is required to park the car at the police station and return with the licence within 48 hours.