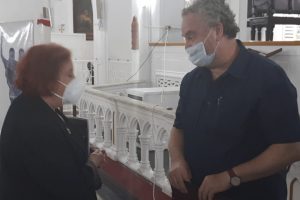 Argentine forensic anthropologist Dr. Luis Fondebrider on Tuesday asked the Guyana Police Force for a list of more than 20 items from the police probe into the killing of the Henry cousins and Haresh Singh earlier this year.

Dr. Fondebrider said he was not allowed to meet directly with police investigators, but his engagement was confined to meeting that included  Home Affairs Minister Robeson Benn, Police Commissioner Nigel Hoppie and Mr. Blanhum.

The Argentine Director of the EAAF spoke with reporters shortly after delivering a lecture at the Roman Catholic Cathedral on the global work of his organisation. The attendees included relatives of  the late Haresh Singh, and Isaiah and Joel Henry as well as Minister of Governance Gail Teixeira.

Dr. Fondebrider said if he does not get the documents and information from Guyanese police, his report would be extremely limited.  “Only with an analysis of that information. I can offer an opinion and an advice ” he said.  The scientist said the Minister and top police officers gave no time when they would provide the information that he has requested, only saying that they would discuss it.

The forensic anthropologist said an autopies for the Henry cousins, who were killed and their bodies hacked, should take a minimum of six hours in keeping with the United Nations-recommended Minnesota Protocol “for this kind of investigation.” “I don’t know how it was done. Until I have those documents I can give an opinion,” he said.

He said if he gets the documents, he could complete his report in three weeks but without them, his “very short” report would be a general one about  his activities and recommendations. “I am optimistic. I think the government has intention but intention is done with concrete acts so that is what I expect,” he said.

The EAAF Director said his organisation and Argentina would be willing to provide training to Guyanese stakeholders.

The GHRA President was somewhat initially disappointed by the response from the Guyanese authorities but he hoped that “more popular momentum” would be generated. “It’s kind of disappointing that it’s not moving forward in the way we had hoped but we still intend to explore it but I think we have to acknowledge that it’s not been as successful as we wanted; there isn’t the interest we had hoped,” he added.

The mutilated bodies of the Henrys were discovered on September 6, 2020 aback Cotton Tree village, West Coast Berbice one day after they had gone to pick coconuts to sell. Police have said that they do not believe the Henrys were killed where their bodies were found.  Singh was killed three days after at the peak of fiery protests, robberies, assaults and damage and destruction to properties in apparent response to the killing of the Henrys.