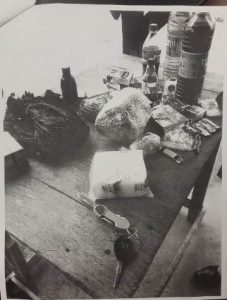 Three prison officers have been charged departmentally as police continue to probe the discovery of several prohibited items, including marijuana and liquor, in bread bins at the Lusignan Prison last month, the Home Affairs Ministry said Monday night.

Home Affairs Minister Robeson Benn was reportedly told in a briefing that the trio was still the subject of a police investigation, but they were charged departmentally by the Guyana Prison Service for neglect of duty on November 17. “However, these departmental charges will in no way prevent these Officers being charged criminally if the investigations find they were involved in the illegal act,” the Home Affairs Ministry said.

Authorities said the concealed items were found in four bread bins at about 2:50 PM in the possession of two prisoners, under the supervision of a Prison Officer, were transporting four bread bins from the prison’s kitchen to the Holding Bay when the Gate Officer on duty
conducted a search and unearthed the prohibited items.