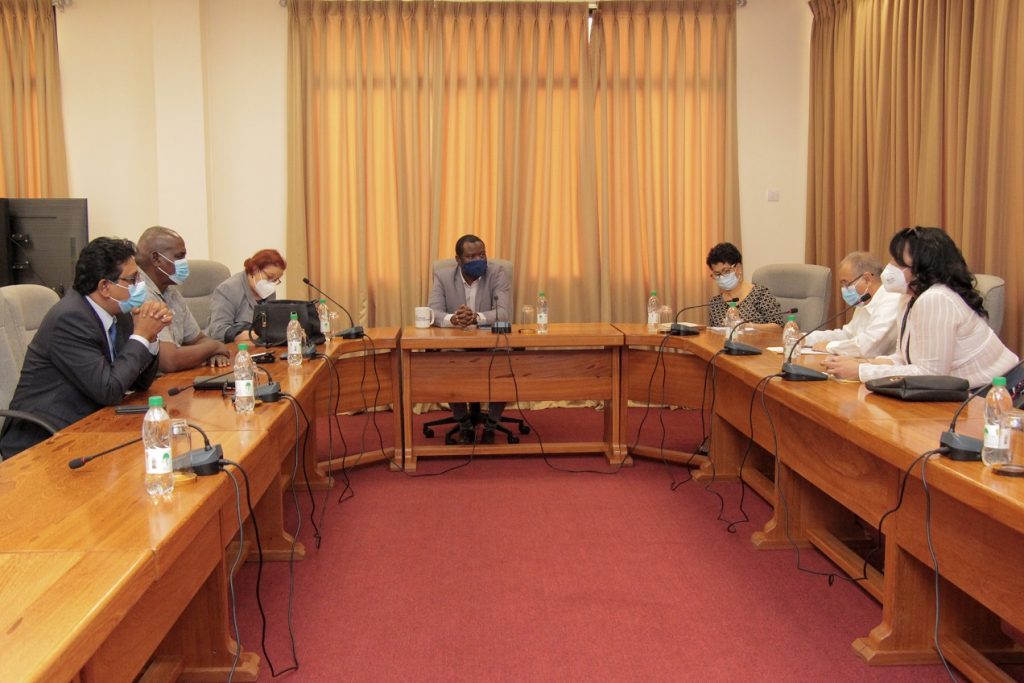 The Minister of Foreign Affairs and International Cooperation, Hugh Hilton Todd convened a meeting on December 7, 2020, with Narciso Reinaldo Armador Socorro, Ambassador of the Republic of Cuba to discuss the pressing issue of a number of Cuban nationals currently camping at South Drain, Suriname desirous of transiting Guyana to get to the United States of America to seek asylum there. Minister Todd was accompanied by Gail Teixeira, Minister of Parliamentary Affairs and Governance; Anil Nandlall, Attorney General and Minister of Legal Affairs and Robeson Benn, Minister of Home Affairs.

Guyana has blocked the entry of more than 1,000 Cubans who say they want to come to the American embassy to seek asylum in the United States.

The Cubans are at South Drain, Nickerie waiting to cross with the ferry that was scheduled to resume operations on December 12. Authorities believed that the Cubans want to enter Guyana to eventually enter Brazil.

The Attorney General says attention will be paid to  flights between the two countries. Caribbean Airlines recently announced that it would be resuming flights between Havana and Georgetown.

High-level government sources have also told News-Talk Radio that the Cuban government has informed Guyana that it is not part of any such exercise and that government should deal with the Cubans as they see fit. Foreign Affairs Minister Hugh Todd on Monday led a Guyana government delegation in a meeting with the Cuban Ambassador to Guyana, Narciso Reinaldo Armador Socorro.  The Minister of Governance Gail Teixeira, Minister of Home Affairs Robeson Benn and the Attorney General were also part of that meeting.

Noting that Brazil is also concerned about the large influx of Cubans and Haitians that are entering that country from Guyana, Mr. Nandlall said the migration of people from the heavily populated nations of Haiti, Cuba and Venezuela was now a major problem facing the smaller Caribbean islands. “The entire Caribbean is facing this problem. Guyana is no different,” he said.

High-level sources said Guyana has already informed Suriname about its position on the issue. “The Guyana government is not supporting it and we are taking all  steps that are available to protect our borders from this influx of illegal entry,” the official said.

Suriname has reportedly decided to deport the Cubans and would be preventing future flights with Cubans from landing there.

The Guyana High Court is later this month expected to decide whether 26 Haitians are being held in custody illegally. They arrived here legally, were allowed entry by immigration and subsequently arrested in Linden and in Georgetown.

Official figures released by the Guyana government two years ago indicate that most of the Haitians who arrive here leave the country without reporting to immigration  officers. Statistics from neighbouring Brazil show that most of them enter that country at Bon Fim in neighbouring Roraima State.