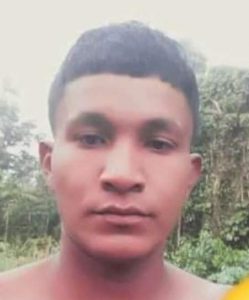 A 26-year old gold miner was killed when he sought to defend his wife from bandits who attacked her at their shop at White Water Backdam, North West District, and police said they have since arrested three suspects

Investigators were informed that Kevin Allam of Turn Basin, Port Kaituma observed the bandits holding his wife by her hair in their shop and he intervened, but they slashed his throat before carting off raw gold from  the premises. “Her reputed husband went to her assistance when the other two suspects pounced on him and dealt him several lashes about his body with a piece of wood until he became motionless. He was then dragged a short distance away where one of the suspects took out a knife and slit the deceased’s throat, whilst another suspect held him down,” Police Force spokesman, Assistant Commissioner Royston Andries-Junor said in a statement.

A knife next to the body of Kevin Allam at the crime scene.

The incident occurred at about 5:30 PM on Friday November 27 and the suspects were arrested on Saturday at about 9 AM at a waterfront at Port Kaituma.

Police said after the bandits wounded Allam, they stole some raw gold but “did not harm the reputed wife after she pleaded for her life.”

Allam was rushed to the Port Kaituma Hospital where he was pronounced dead on arrival.