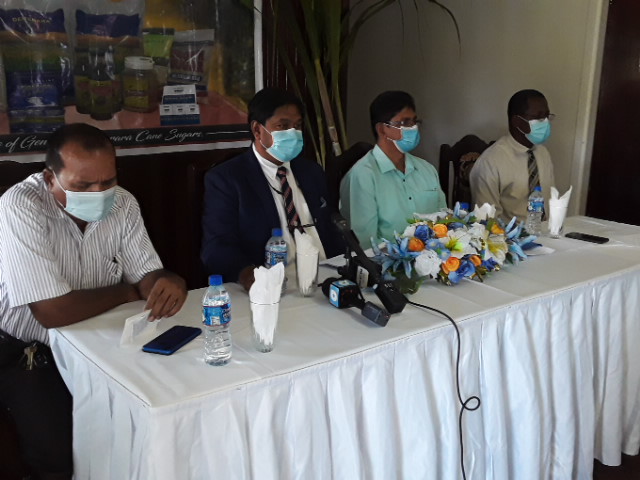 Chief Executive Officer of the Guyana Sugar Corporation (GUYSUCO), Sasenarine Singh on Monday said that state-owned entity would be initially focusing heavily on packaged sugar as the corporation prepares to get into other value-added sugar-related products and services.

“The world market price for sugar is 15 (US) cents now so let’s be real. That’s the dump market we are talking about but  listen to this. This sachet of sugar basically can be sold in the world market for 60 US cents per pound right now so this is where the money is,” he told a news conference at La Bonne Intention (LBI).

GUYSUCO’s production cost, he said, is US 32 cents per pound.

Mr. Singh said already the Enmore packaging plant has been restarted and there are plans to increase the production lines from two to four. With more than 40,000 packets of sugar already stockpiled at Enmore “waiting for the market absorb”, , the GUYSUCO CEO said the Caribbean, North American and other markets are being targeted. “In the short-term our focus remains moving away from the bulk sugar that we dump on the world market, moving towards packaged and bagged sugar,” he said. Nine weeks ago, he said “pieces of scrap iron” were strewn around the Enmore packaging plant where two production lines are in operation with plans to return it to a full four-lane capacity by 2021.

Medium to long term plans are in train to get into the production of ethanol, glucose, liquid sugar, distilled sugar, industrial grade white sugar and agro-heritage tourism services.  Mr. Singh said there is a Caribbean market for 200,000 tons of refined market and 20,000 tons in Guyana.

Mr. Singh said new factories would be installed at Rose Hall-Canje and Enmore estates by 2022, as part of plans to increase the number of sugar mills from three to six. 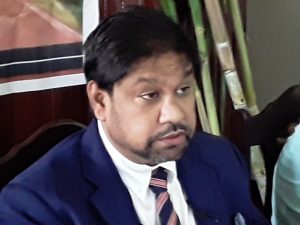 Officials said sugar estate lands are already being cleared and tillage machinery is being purchased. “Those of you, who are in the sugar industry, would know that if you do not till and plant right you are stuck for five years with a crop that is going to underperform so you got to get it right from the very inception,” said Mr. Singh. He said one the challenges that have been facing GUYSUCO over the years has been a reduction in the number of tillage days from 120 to 70 days. He suggested that tilling be done 24 hours per day or production would be adversely affected.

GUYSUCO’s Director of Field Operations, Yudi Persaud said the corporation has begun preparing fields at Skeldon, Rose Hall and Enmore for cultivation, cultivation of seed beds, and purchasing of 44 tillage tractors for GYD$1.2 billion to full return the estates to production by 2024. “By the end of 2024, we expect maximum production,” he said. The 2020 National Budget provides GYD$3 billion for GUYSUCO.

The corporation is targeting a production rate of 80 tons of cane per hectare with new equipment expected by February 2021, upgrade of cane varieties and mechanisation.

Already, the corporation is struggling to meet a 90,000 ton target, largely due to the unexpected and unusual rainfall that “hammered our tillage operation and our sugar production,” he said. At Albion between November 2 to 21, there were 394 millimeters of rainfall compared to a historical average of 15 millimeters. He said as a result of the heavy rainfall, GUYSUCO lost the opportunity of producing almost GYD$354 million worth of sugar.

Production loss-time is said to be one of the major problems due to outdated equipment such as chains, pumps, mill rollers and turbines.  Officials said new equipment would be purchased and there would be a greater emphasis on mechanical harvesting and loading.

Human Resources Director, Michael Carter said a number of new recruits  for factory personnel would be trained for 18 months at the Port Training Centre and the University of Guyana has been asked to offer  Diplomas in Sugar Cane Agronomy, and Sugar Engineering.

Figures show that GUYSUCO has hired 270 persons at Rose Hall, 226 at Skeldon and 194 at Enmore to do preliminary work. The corporation has spent GYD$126 million to date for procuring equipment, material and contractors for those three estates.

GUYSUCO plans to next year spend GYD$2.8 billion on Rose Hall-Canje; GYD$2.1 billion on Enmore and GYD$1.4 billion on Skeldon.