Occupational Safety and Health officers being trained in foreign languages 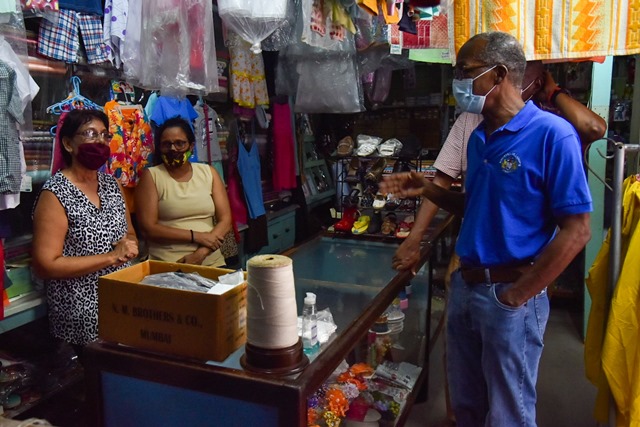 Minister of Labour, Joseph Hamilton interacts with this vendor at the Bartica Municipal Market.

Minister of Labour Joseph Hamilton says Labour and Occupational Safety and Health (OSH) Officers are being taught to speak and read foreign languages to ensure effective communication with the workforce.

Just back from a two-day visit to Region Seven (Cuyuni-Mazaruni), he says 24 employees of the Labour Ministry have already started learning Portuguese.

He says training will also be available in Mandarin, Portuguese and Spanish.

Minister Hamilton said foreign language training is important due to the expected large influx of migrants whose first language may not be English.

“Whether it be employers or employees, at the level of the Labour Department and OSH, we have to be prepared to interact and engage them,” Minister Hamilton was quoted as saying by government’s Department of Public Information

Minister Hamilton said the language training will ensure there is proper supervision of labour relations and workplace interventions.

“In some of the mining districts, you have foreigners there – Brazilians and Venezuelans – and therefore, the Officers must be able to communicate with them to ensure labour and OSH laws are not breached.”

The Minister added that the Ministry will work with the University of Guyana which offers free Mandarin classes.

The Ministry is taking steps to ensure every region is equipped with at least two Labour and OSH officers, who can expect continuous foreign language training.

Meanwhile, Bartica Deputy Mayor, Ms. Arita Embleton has welcomed the Ministry of Labour’s plan to train and station two Occupational Safety and Health (OSH) in the region, saying that it would be particularly beneficial to the mining town.

Her remarks followed Minister Hamilton’s meeting at the Mayor and Town Council’s Boardroom on Monday where he outlined the administration’s plans for training and development in domestic and industrial fields across the country.

“We are a mining town. We really need the OSH officers in our region […] I applaud the move of OSH officers returning to Bartica because if anyone is being trained outside of Bartica, they should come back to work in their region in order to develop it,” she told DPI.

OSH officers will be trained to supervise and inspect operations at work sites to ensure compliance with safety standards to reduce fatal workplace accidents.

Ms. Embleton said the Ministry can expect full co-operation from the Bartica Town Council as the programmes are implemented.