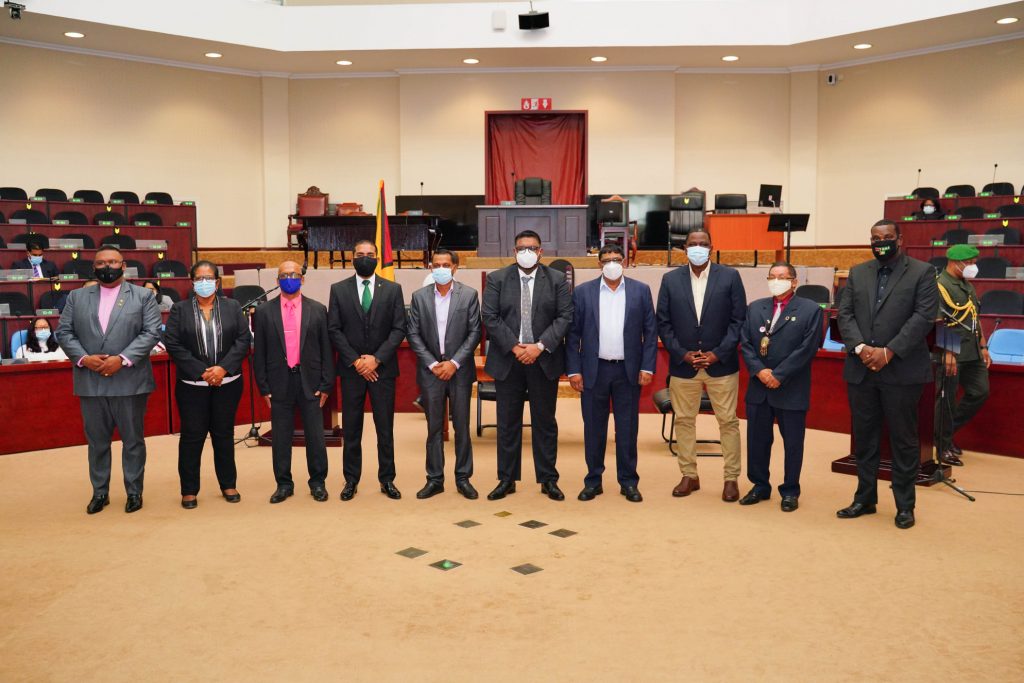 The swearing in of 10 Regional Council Chairmen and Vice Chairmen-including those from the opposition- before President Irfaan Ali do not set the stage for political dialogue with the opposition, he said Monday.

The President drew a distinction between his role in swearing in the Regional Chairmen and Vice Chairmen, and  political dialogue on a new governance model that his People’s Progressive Party had promised while in opposition.

“This is what is expected constitutionally that they have to be sworn before the President so that’s totally a constitutional mandate,” Dr. Ali said.

Among those taking the oath were the Regional Chairmen and Vice Chairmen of Region Four (Demerara-Mahaica), Region Seven (Cuyuni-Mazaruni) and Region 10 (Upper Demerara-Upper Berbice) which were all won by the opposition A Partnership for National Unity+Alliance For Change (APNU+AFC)

The President again called on Opposition Leader Joseph Harmon to eschew his position that the government is illegal.

“Unless the Leader of the Opposition makes the necessary adjustment in his public pronouncement, I can’t hold talks with someone who believes I’m legitimate,” he said.

The President said Guyana has a legitimately elected government and the Opposition Leader “needs to get on board and do what is right-morally, ethically-and what is right in the interest of our country.”

“The Opposition Leader has to understand that he cannot act in the way that he acted in those five months when our country was dragged through an undemocratic path,” Dr. Ali added.

APNU+AFC has accused the PPPC of rigging the March 2, 2020 elections by widespread voter impersonation and unverified votes due to missing documents. Two election petitions are pending in the High Court.

On the other hand, the PPP and sections of the international community have accused the coalition of attempting to falsify the Region Four results to give the coalition a victory.

Meanwhile, President Ali charged the newly confirmed Regional Chairmen and Vice Chairmen to ensure that they serve everyone, regardless of which political parties they represent. 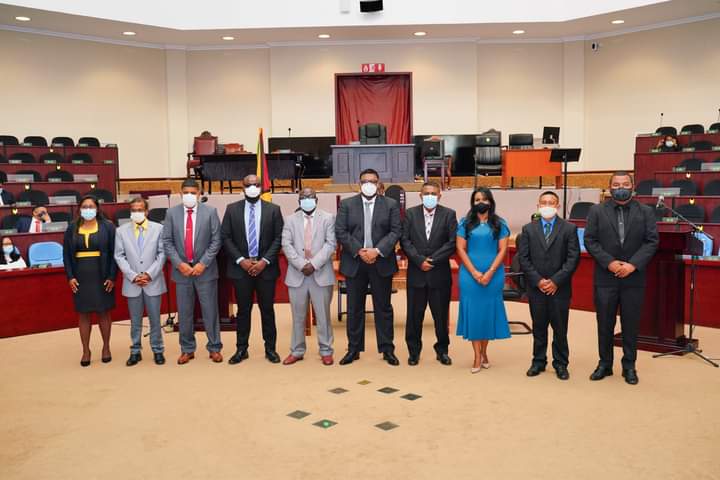 The Head of State made these remarks, following the official swearing in ceremony, held at the Arthur Chung Conference Centre, Liliendaal.

“It is not an easy task, but it must be a selfless task that we take seriously. Your oath of office today is one in which you would have committed yourself to serving the people …which means basically, that although we represent and you represent different political parties, your conduct and action have to be for all the people of the region,” he was quoted as saying in an Office of the President release.

The President reminded the officials of the important role that the Regional Democratic Council (RDC) representatives play in serving the people. “You are the bridge between the central government and the local government. The RDC’s are expected to be that important bridge which represents the interests of all the people in the various regions; that bridge that seeks to improve the lives and condition under which the people of all regions live.”

President Ali also assured the newly sworn in Regional representatives of his government’s full support. “I want to assure you that the central government will provide the necessary support to allow you and enable you to facilitate the development and upward movement of the people of our country, in every single region. Today, you embark on a journey of leadership, one that all of us have been entrusted with by the people of our country.”

He also pointed to the important role that the officials will have to play in returning their communities’ businesses and other sectors to financial sustainability in the wake of the COVID-19 pandemic. The President reiterated the importance of Government’s holistic approach to dealing with the effects of the Pandemic, including the reprogramming of US$60M, which will be spent at both the community and regional levels to bring relief to all citizens. “Once again, congratulations. Good luck and know that you have a partner in the government. You just have to reach out to us, and we are ready to work with all of you for the betterment of the people of our country and our country as a whole.”
The Regional Chairmen who took the oath of Office today are: Mr. Brentnol Ashley- Region One (Barima -Waini) , Ms. Vilma Audrey Da Silva- Region Two (Pomeroon- Supenaam), Mr. Mohamed Inshan Ayube-Region 3 (Essequibo Islands- West Demerara), Mr. Daniel Seeram- Region 4 (Demerara-Mahaica), Mr. Vickchand Ramphal- Region 5 (Mahaica-Berbice), Mr. Permaul Armogan- Region 6 ( East Berbice- Corentyne) , Mr. Kenneth Williams – Region 7 (Cuyuni-Mazaruni), Mr. Bryan Allicock Region 9 (Upper Takutu- Upper Essequibo) and Mr. Deron Adams – Region 10 (Upper Demerara-Upper Berbice).
The Regional Vice Chairmen included: Ms. Anasha Peters- Region 1, Mr. Humace Oudit- Region 2, Mr. Omesh Satyanand- Region 3, Mr. Samuel Sandy- Region 4, Mr. Reon Peters- Region 5, Mr. Zamad Housein- Region 6, Mr. Nageshwari Lochanprashad, Region 7, Mr. Bertie Xavier- Region 9 and Mr. Douglas Gittens- Region 10.
The Regional Chairman and Vice Chairman for Region 8 (Potaro-Siparuni) have not yet been elected.