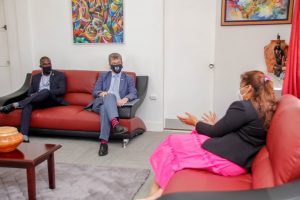 Former University of Guyana (UG) Vice Chancellor Professor Jacob Opadeyi is back in Guyana and is employed as Special Projects Officer at the Ministry of Education, seven months after mounting the campaign platform for the governing People’s Progressive Party (PPP).

“A priority on the agenda was how the two countries can continue to collaborate with regards to matters in relation to the education sector and its development,” the  Ministry of Education said in a brief statement on its Facebook page.

Professor Opadeyi had been quite visible at the PPP’s final 2015 election campaign rally at Lusignan, even donning a party campaign cap before mounting the stage to be seated among special invitees. He is the former doctoral supervisor of President Irfaan Ali who holds a Doctorate in Urban and Regional Planning from the University of the West Indies (UWI). 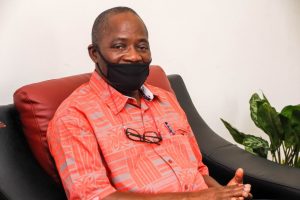 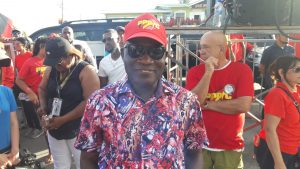 Former Vice Chancellor of the University of Guyana, Professor Jacob Opadeyi at the PPP’S 2020 election rally at Lusignan, East Coast Demerara on February 29, 2020.

The PPP’s Juan Edghill had flagged the appointment of Professor Paloma Mohammed-Martin as Vice Chancellor, but the Minister of Education had later said that she has confidence in her.

UG has repeatedly stated that Professor Mohammed-Martin has been been appointed after a 26-step transparent process by the Council, the university’s highest governing authority.

The Nigeria-born Trinidadian had served as UG Vice Chancellor from 2012 to 2016 when he did not seek a renewal of his contract. His tenure had been dogged by industrial action by academic and non-academic workers mainly over the chronic problem of low wages and salaries. Relations between the students and the Opadeyi-led administration had  also been strained.