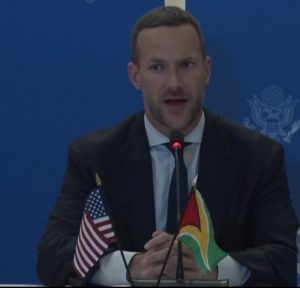 The United States government-run bank, the International Development Finance Corporation (DFC), is confident that American businesses would win bids to build energy and other major infrastructural projects in Guyana and Suriname, despite competition from China, its Chief Executive Officer Adam Boehler said Tuesday.

He was confident that American companies would get the edge over their Chinese counterparts to build huge infrastructure projects, he said “it’s a focus on high quality.” “Any American company, like any company, has to win competitive bids. I am not going to sit here and tell you that we’re supportive of an open, free economy with rule of law and transparency and say the rules don’t apply to everybody; they should,” he said.

Mr. Boehler differentiated American and other companies from perhaps Chinese companies is “our focus on high quality projects and local labour to drive those.” A number of Chinese projects such as the Skeldon Sugar Factory, Arthur Chung Conference Centre and the Marriott-branded state-owned hotel has had some defects. “I know there have been some disappointments here. I will tell you that may not always be the quickest but I will commit to be the best with a focus on high quality infrastructure but, no! that we are supportive of whoever comes out as long as the bid is competitive, open, transparent and there is a focus on high quality, long term investment in Guyana,” he said.

The National Procurement and Tender Administration Board (NPTAB) is largely made up of People’s Progressive Party (PPP) supporters. Vice President Bharrat Jagdeo recently shrugged off questions about the composition of the board, saying that the law does not provide for an opposition representative on that body.

He said some of the topics would include “how do we get the cost of electricity down so that the average person pays less for their electricity.” American oil major, ExxonMobil, and the Guyana government are making  arrangements to bring natural gas to shore. The state-owned Guyana Power and Light  has said it would be buying generators that would be able to use natural gas to generate electricity. Authorities hope that Guyanese would get cheaper electricity by 2024.

Mr. Boehler highlighted interest in investing in small and medium-sized businesses, agriculture and infrastructural projects such as a deepwater port, and the Guyana-Suriname bridge. “To have those opportunities is a rare-time alignment between Guyana and Suriname to have great, new administrations that are investing in the private market,” the DFC Chief said. President Irfaan Ali and Suriname’s President Chandrikapersad Santokhi are next month expected to sign the agreement for the construction of the bridge that would begin 2.5 kilometres south of the Moleson Creek Ferry port and hop across to Long Island before continuing to the eastern bank of the Corentyne River in neighbouring Suriname.

The DFC official said that bank could back US-based companies in Guyana as well as Guyanese companies to drive opportunities.

Mr. Boehler is here at the helm of a delegation from the US Department of Treasury, Export-Import Bank, Department of State, National Security Council and the Department of Homeland Security to “build” on US Secretary of State Mike Pompeo’s recent visit to Guyana and Suriname. The DFC official noted that it was the first time in decades that representatives of several American government agencies have visited a country in the Western Hemisphere.  He said Guyana’s general and regional elections whose results took five months to declare was an impetus for the visit. “Now, we have a foundation for an elevated and strengthened relationship between the United States and Guyana and I think it started with the finalisation of the democratic elections here that gave us the basis and the administration here commitment to private enterprise, transparency and rule of law; that’s critical for us to invest,” he said.

Chairman of the Private Sector Commission, Nicholas Boyer described the DFC as a “great partner now who can help us with access to capital now and help us with our infrastructure build out to really unlock the potential of a number of sectors in Guyana.” He said much would now depend not only on follow-up talks through the US embassy but the possibility of softer financing terms. “It’s hard to tell at this point, but I would say based on what they were saying, we are going to assume that the interest rate and the lending terms are going to be a lot better. You taking that much funding, looking for projects and putting it to compete where we have a high cost of capital so I’m going to expect that the cost of capital is going to be the difference,” he said.

The DFC, which has US$60 billion to invest globally, also met with representatives of the American Chamber of Commerce Guyana and the Guyana Office for Investment (GO-Invest). The team also visited Suriname.

DFC, on its website, says it was established in 2019 through the passage of the BUILD, or Better Utilization of Investments Leading to Development, Act which strengthened and modernized American development finance. The BUILD Act combined the capabilities of the Overseas Private Investment Corporation (OPIC) and the Development Credit Authority which had previously been housed in the U.S. Agency for International Development (USAID).