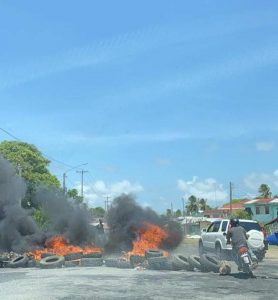 There is fresh unrest on the West Coast Berbice where residents are Sunday blocking the Number 5 Village Public Road, almost one month after the Henry cousins had been killed and their bodies found on a coconut estate.

Residents have thrown debris and old tires are being burnt to protest the planned exhumation of the boys bodies, a usually reliable source said.

Attorney-at-Law Nigel Hughes said he was unaware of the exhumation of the bodies but said eventually that would likely be done when the Argentine team of experts come to Guyana after the COVID-19 measures facilitate their travel through a number countries to Guyana.

Police Divisional Commander Edmond Cooper confirmed the occurrence, saying that the “the people say they want justice.” He and other policemen were busy trying to persuade the people to stop blocking the road.

Guyana Police Force spokesman, Royston Andries-Junor said police are “on the ground and have begun the process of clearing the roadways which was blocked by residents of the village. ”

Several persons had been detained for questioning but no one has been charged with the offence.

Police have since said the Henry cousins had been killed elsewhere and their bodies taken to the location where they had been found.

The Caribbean Community (CARICOM) Regional Security System (RSS), which came to Guyana recently at the request of the Guyana government, has dispatched samples to St. Lucia for analysis. The Guyana Police Force, Guyana Human Rights Association and the law firm of Hughes, Fields and Stoby, which is representing the interests of the Henry, say an Argentine team is expected in Guyana to perform a highly scientific investigation with the hope of finding the perpetrators.

The bodies of the the Henry cousins had been discovered on Sunday, September 6, 2020 a day after they had left their Number Three Village residence to pick coconuts to sell

17-year old Haresh Singh was killed and his  motorcycle burnt as he was heading to his farm on September 9, 2020 , at the time of unrest that had been sparked off by the killing of the Henrys.