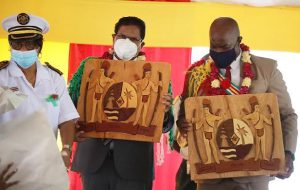 Vice President Ronnie Brunswijk and more than half of the Council of Ministers, the president is on a working visit to Nickerie (picture from Starnieuws)

Suriname’s President Chandrikapersad Santokhi says the bridge across the Corentyne River will be built within five years with financing through a public-private partnership between Guyana and Suriname.

“There are financiers ready, but we have to prepare well and go through the file carefully so that we do not make mistakes with matters that were agreed in the recent past,” he was quoted by Starnieuws on Sunday as saying.

Leading a team of ministers to Nickerie, a township on the east bank of the Corentyne River across from Skeldon in Guyana, he said there is a firm agreement with President Irfaan Ali to build the bridge.

Starnieuws reports that the Surinamese leader said it is not only about developing the oil sector, but also the gas industry. He indicates that Suriname, Guyana and French Guiana have gas reserves. Mr. Sanytokhi said the countries could develop this sector together and export it to the region and the rest of South America. For Suriname it could mean the development of the bauxite industry in the Bakhuis area, the report said.

The Suriname President says a number of Working Groups, including one on the Movement of Persons and Goods Traffic between Suriname and Guyana, would be established.

Vice President Ronnie Brunswijk said the Corentyne River Bridge would make smuggling, illegal transit and corruption a thing of the past. Referring to the unofficial crossing from Nickerie to Skeldon with small wooden boats, President Santokhi said that the backtrack will also be a thing of the past. He paints a picture of a trade center, jetty and employment.

President Santokhi, Vice President Ronnie Brunswijk and more than half of the Council of Ministers are on a working visit to Nickerie