AFC divided so far on pulling out of coalition with APNU; Patterson refuses to withdraw resignation 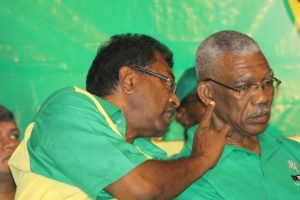 Some executive members of the Alliance For Change (AFC) are pushing for their party to leave the coalition with A Partnership for National Unity (APNU) after repeated instances of bad faith negotiations, even as David Patterson remained adamant that he would not be withdrawing his resignation as AFC General Secretary, well-placed sources said.

“The Party considered the Letter of Resignation from David Patterson as General Secretary and Member of Parliament and unanimously urged that Patterson reconsider his position,” the AFC said.

AFC said it was peeved at APNU’s breach of an addendum to the Cummingsburg Accord, a political agreement between the two organisations that had aimed to cement the AFC’s Regional Council Vice Chairmanship in Regions Four (Demerara-Mahaica) and Seven (Cuyuni-Mazaruni). “Deliberations on the Addendum to the Revised Cummingsburg Accord that provides for the AFC to name the Vice Chairpersons for Regions # 4 and # 7 noted that the Alliance For Change behaved honorably and with integrity and would have upheld the Accord and Addendum. The party also noted the responses offered by the Leader of APNU as to the reasons why the similar provision was not upheld by APNU,” the AFC said.

News-Talk Radio Guyana 103.1 FM/ Demerara Waves Online News was told that one of the reasons Mr. Granger gave was that the AFC did not pick up sufficient votes to warrant it getting the Region Four Vice Chairman. He has offered similar explanations for not giving then APNU partners Justice For All Party (JFAP) and the National Front Alliance (NFA) for not giving them a seat each in the National Assembly.

The AFC said its NEC was of the strong view, that a fundamental breach of the Accord was committed, as such a committee has been established to provide guidance and recommendations to the party on the continued effectiveness of the Accord as well as a review of the mechanisms to effect any future agreements. The AFC said a committee will be submitting its report within 10 days, thereafter another NEC meeting will be held on October 18, 2020.

AFC member , Kamal Persaud got the support for Region Seven but Neilson Mc Kenzie was outvoted to give both the Region Four Chairmanship and Vice Chairmanship to APNU. APNU General Secretary, Joseph Harmon had attributed that to a breakdown in communication and he had  hoped for the issue to be resolved between APNU Chairman David Granger and AFC Leader Khemraj Ramjattan.

High-level sources say AFC executive member Mrs. Cathy Hughes is a strong advocate for her party to walk away from the coalition, but co-founders Mr. Ramjattan and Party Chairman, Raphael Trotman still believe that staying in the coalition is the best option to retain its voice in the national public domain through Parliament and confront the incumbent People’s Progressive Party (PPP).

The sources recall that AFC and its prime ministerial candidate, Mr. Ramjattan, had been systematically sidelined by APNU during the March 2, 2020 general election campaign. None of the banners and other campaign paraphernalia had reflected Mr. Ramjattan even at the launch of the coalition’s campaign at D’urban Park, Georgetown.

The sources had noted that the People’s National Congress Reform-led APNU had also gone ahead of AFC and had campaigned in interior regions. Over 90 percent of campaign jerseys had been reportedly printed only to reflect APNU.