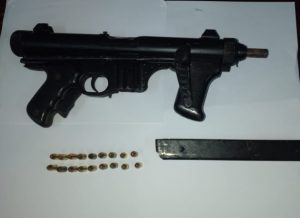 The Beretta submachine gun and ammunition that was allegedly found in possession of a Surinamese man at the Guyana side of the backtrack with Suriname.

A Surinamese man has been arrested in connection with the alleged discovery of a large amount of cash, a submachine gun and ammunition at the Guyana side of the back-track route with Suriname, police said.

The 26-year old man, who is from Lot Zuelen, Paramaribo, Suriname, was allegedly carrying one Beretta submachine gun with the number defaced, 25 live 9MM rounds of ammunition, US$3,000 and $6,250 Suriname dollars.

“The suspect was arrested and taken into Police custody at Springlands police station, along with the firearm and ammunition; same were marked, sealed and lodged by Customs Officers , in the presence of the suspect, who is presently in custody assisting with the investigation,” Guyana Police Force spokesman, Assistant Commissioner Royston Andries-Junor said.

Investigators said during the exercise they noticed a speed boat, with five passengers,  arrived from Suriname and landed at Eno boat landing. Five passengers were on board the said boat.