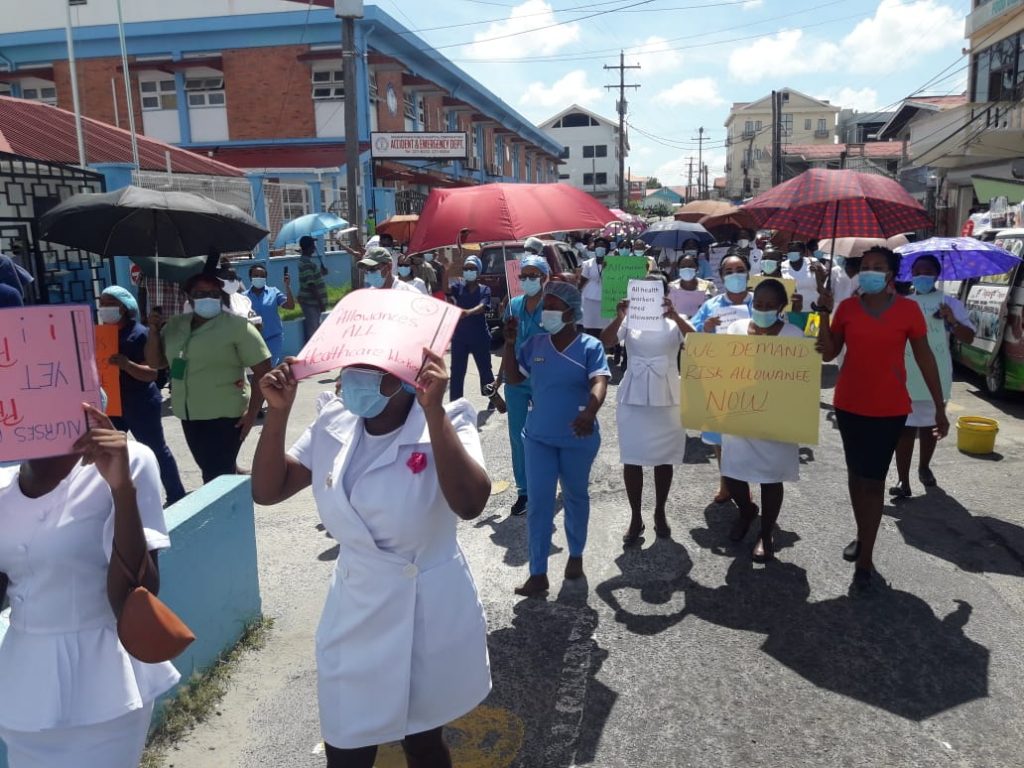 President Irfaan Ali on Saturday dismissed arguments that government was wasting money on reopening sugar estates and buying new vehicles for himself and the Prime Minister. “There are some strong independent actors looking to exploit the circumstances,” he said.

Public Service Minister Sonia Parag has indicated that industrial unrest at State-run hospitals across the country to press demands for allowances and other benefits is illegal. The nurses are peeved at the allocation of GYD$150 million to pay allowances to only COVID-19 frontline workers.

Ms. Parag told the government’s Department of Public Information that no notice of industrial action was given. “Specifically, with the health sector, they are also known as essential workers, there are certain steps that are to be taken before  you jump into  a protest . As far as I am aware, those steps were not taken in accordance with the laws and the Ministry of Public Service and the Ministry of Health, we are unclear as to what the grievances are because they have moved from risk allowance to increase in salary; it’s changing,” she said.

One of the nurses, who was on the picket line outside the Georgetown Public Hospital Corporation on Friday vowed to continue the protest until he and his colleagues are paid the COVID-19 risk allowance and a number of them are not eligible for pensions and gratuities based on their employment status. Nurse John Allen also dismissed claims that Guyana’s economy was not  too healthy and so government could not afford to pay much more. “There are funds! Why open back a failing industry- sugar. You’re spending billions on sugar when the health care workers are not being addressed. Come on! What is sugar doing for the public when the health care workers are putting their lives at risk?,” he said.

But President Ali, speaking with reporters on Saturday, questioned the absence of solidarity in the face of glaring evidence about the socio-economic impact of the closure of the Skeldon, Rose Hall-Canje, Wales and  Enmore  Estates by the previous government. “Where was the solidarity when more than 7,000 sugar workers were sent home? What was the situation then? Where was the solidarity when 1,000 bauxite workers lost their jobs… There was no socio-economic analysis of the impact of the closure of the estimates.  We are forgetting that. We are missing that. We don’t want to answer that question anymore.

Dr. Ali said he had no apology for reopening the sugar estates that had been closed by the David Granger-led administration on the grounds that they were a drain on the Treasury because the cost of production was higher than the international price for sugar. “We understand, you can see, you can physically see the socioeconomic impact of the closure of the estates in those communities. I can’t apologies for bringing back those jobs, creating those jobs,” the President said.

He said calls by the healthcare workers for duty-free concessions and other requests are “outside of the scope of what the country can afford” as government has to be mindful of the implications for each category of workers.

The President defended his administration’s decision to spend GYD$95 million on buying vehicles for the government, even as he denied that they would be only for the President and the Prime Minister. He  said that amount would be for vehicles across the government sector for technical workers and ministers to get their jobs done. He suggested that GYD$3o0 million to GYD$500 million worth of vehicles have been destroyed.

The President assured that over the next five years would be taking steps to improve the quality of life of frontline workers, housing assistance, and better add-on benefits. He said in addition to the risk allowance, the front-line workers would also get the GYD$25,000 per household cash grant and pay less Value Added Tax. “We are committed to ensuring that all categories of workers, at the end of the day, have a better standard of living, better opportunities and greater prospects in the future,” he said.

Other demands include the need for more Personal Protective Equipment (PPE), non-taxable allowances, land for public servants and increased salaries. “Most days when we turn up for work, our supervisor has to be walk over looking to dispense gowns to us. The persons, who are working on the night shift, are forced to be wrapped with sheets to protect themselves. This is very unfair. You can’t be building a bill board for someone coming for 24 hours and the numerses don’t have PPE. We are being treated unfairly,” another nurse said.