“I am calling on my people to end this carnage”- PNCR Chairman Volda Lawrence… Now, your turn Irfaan Ali 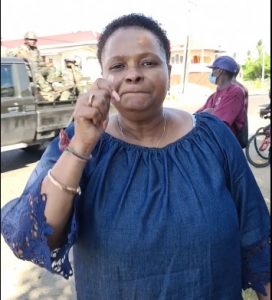 Chairman of the People’s National Congress Reform (PNCR), Volda Lawrence on Wednesday called on her supporters to end more than two days of violent unrest and in exchange she is calling on President Irfaan Ali to take similar action.

“As a leader, we have to call a spade a spade and, as I speak, I am calling on President Irfaan Ali to call on his people too. I am calling on my people to end this carnage, to end the way in which they are grieving and I am asking him to do likewise. As our people pull back so he must call on his people too to pull back,” she said on Attorney-at-Law James Bond’s Facebook page.

Ms. Lawrence issued the call “to every single” PNCR member “irrespective of your status” to “stop the carnage” in keeping with her party’s track record of always governing for all Guyana in pursuing the good life.  “We all would have our likes and dislikes but we certainly can display our grief in a better manner. We certainly can empathise in a different way and so I am calling on the President,” the PNCR Chairman said.

The PNCR Chairman sounded her appeal on the same day that Opposition Leader Joseph Harmon said the protests were not about Afro-Guyanese and Indo-Guyanese but it was  about the struggle against the illegitimate People’s Progressive Party-led administration and injustice. “I am calling on all of Guyana to recognise that this is not a struggle between the races. This is a struggle against oppression, is a struggle against fraudulent government and we must stand united against that,” he said.

“I am calling on every single member of the People’s National Congress Reform, irrespective of your status, I am saying that we cannot continue . This carnage must stop,”

Warning that Guyana’s problems would get deeper and wider and people were being regarded as barbarians, she added her voice to the need for an independent police investigation that would lead to be the perpetrators to be charged.  Ms. Lawrence acknowledged that relatives, friends and other supporters were ripped with anger, fear, vexation and hurt at the loss of two sons, but she appealed to supporters to stop blocking the West Coast Berbice public road. “We are asking for justice, we are asking for peace, we are asking for us to stop. Pull away the things from the middle of the road . We can do things differently, we can send our message differently, It doesn’t mean that we are weak,” she said.

The PNCR Chairman lobbied c0mmunity influencers, Hindu and Muslim leaders to help return life t0 a semblance of peace. “I am here, I am troubled as a leader and I am here I am calling on your people to stop just as I have called on my people to stop, as the Chairman of the great People’s National Congress Reform,” she said in her call to President Ali.