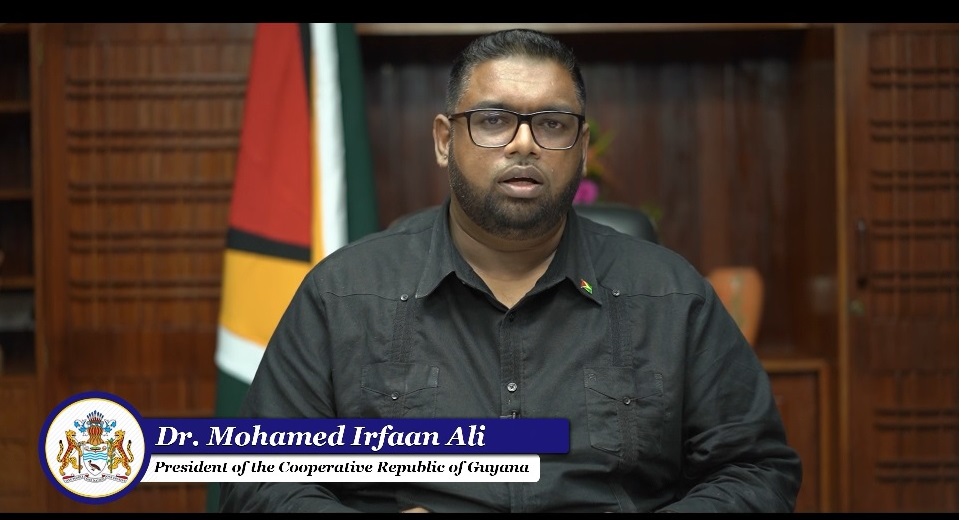 President Irfaan Ali Wednesday night announced that Guyana has asked the United Kingdom (UK) and the Caribbean Regional Security System (RSS) to probe the killing of three youths over the past three days and violent unrest in West Coast Berbice that has resulted in severe injuries, robberies and damage to property.

Autopsies on the mutilated bodies of Isaiah and Joel Henry were conducted Wednesday and the bodies handed over to the families for burial. Seven people- including the owner of the coconut estate at Cotton Tree village where Henrys’ bodies were found, his son, a handyman and coconut vendors- remained in custody. Attorney-at-Law Nigel Hughes reportedly captured video and pictures of the autopsies to provide to an international forensic investigator. The opposition A Partnership for National Unity+Alliance For Change (APNU+AFC) has also called for an impartial and professional probe as it has no confidence in Crime Chief, Senior Superintendent Wendell Blanhum.

Dr. Ali also announced that he was mulling an international Commission of Inquiry into the events surrounding the killings and would ask the United Nations (UN) for help to possibly punish perpetrators or racial hostility. “I have asked the Attorney General and Minister of Legal Affairs to explore, within the United Nations system, all means available to hold to account, all those who spread race hate and instigate racial strife,” the President said.

The President said as part of efforts to bring to justice all those responsible for the killings and associated events, he was considering holding a Commission of Inquiry. “We need to understand who instigated, what was instigated and as a result, I am exploring the commissioning of an International Commission of Inquiry (COI) to look at every aspect of this situation, to look beyond what took place on the ground, to look at the behaviours that came about as a result of statements made. The COI is important for us to have a comprehensive understanding as to what took place,” he said.

“The events surrounding these horrific and barbaric acts of murder and the criminality that saw the loss of property, that saw even the loss of lives, people being chopped, robbed and brutally assaulted, require a more comprehensive and holistic review and as such, we need to get to the bottom of this,” the President added.

He said those planned three steps would be aimed at getting a comprehensive and holistic picture as to all the events surrounding what took place. Dr. Ali said he was confident that the Guyana Police Force and the Guyana Defence Force would restore order in keeping with all available resources, laws, protocols and guidelines to ensure the situation does not escalate. The President promised “to bring justice to every single person who has been affected in these circumstances.”

Hours after he blamed Leader of the People’s National Congress Reform (PNCR), David Granger and Opposition Leader Joseph Harmon for opportunistically using the brutal slayings of the Henrys to confront the illegitimate People’s Progressive Party (PPP) administration, the President flayed those who wanted to score political points from such tragic circumstances.

17-year old Haresh Singh was killed and motorcycle burnt as he was heading to his farm aback Number Three Village, West Coast Berbice. Later Wednesday afternoon, 34-year old Chatterpaul Harripaul called Roy of  Bath Settlement was beaten to death after, according to police, he exited his car and fired his shotgun at a crowd of protesters about 60 metres away.

2020-09-09
Denis Chabrol
Previous: Protesters kill man who opened fire on them- police
Next: “I am calling on my people to end this carnage”- PNCR Chairman Volda Lawrence… Now, your turn Irfaan Ali