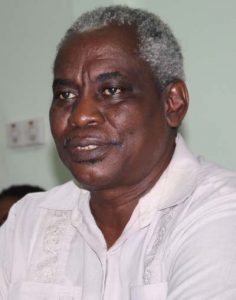 After an overnight lull, residents of Number 5 Village, West Coast Berbice on Monday morning blocked the public road to continue venting their anger against the brutal slaying of two youths in the backlands of Cotton Tree village where they had gone to pick coconuts.

Home Affairs Minister Robeson Benn appealed to the understandably grief-stricken villagers to cease said blocking that section of the east-west thoroughfare as it would hamper police from solving the crime speedily.  “I wish to urge all residents of the local communities to act in a manner that is lawful and helpful to the Police in aiding their work and in preserving the peace across and between all communities,” Mr. Benn said.

After the bodies of the  youths were found, residents blocked the road at Number 5 Village with burning tires, old vehicles and other material as they called for justice. They late last night ceased their protests but resumed shortly after 6:30 AM, snarling vehicle traffic in both directions.

The Home Affairs Minister indicated that government has instructed the police to conduct a thorough probe into the killing if cousins Isaiah and Joel Henry and the mutilation of their bodies.  “There is no justification for these acts.”

“The Guyana Police Service is vigorously pursuing its investigations into this crime and is required to spare no lawful effort to bring the perpetrator(s) to justice. These investigations must be complete and thorough,” Mr. Benn said. He added that The Ministry of Home Affairs would fully support all efforts, and source and bring to bear all requisite resources, towards helping the West Coast Berbice Communities through this difficult time.

The Home Affairs Minister said he was shocked at the killing of the youths who left their homes at about 5 AM Saturday morning to pick coconuts to sell but never returned home. “I share the shock, hurt and anger at this gruesome event, and particularly, the grief of: the families and friends of these youths of all of the Berbice Communities. The countrywide distress, abhorrence and condemnation are noteworthy and very keenly felt,” he said.

Meanwhile, Education Minister Priya Manickchand urged politicians not to use the situation to score political mileage. “I also call on political leaders not to behave irresponsibly by using a family’s pain, a community’s sorrow, a country’s grief to gain cheap points. That would be almost as reprehensible as the gruesome acts committed. We must all reject such politicians,” she said.

President Irfaan Ali and Opposition Leader Joseph Harmon have separately appealed to residents to be patient and allow police to conduct their investigations. At the same time, they condemned the incident and urged that every effort be made to bring the perpetrators to justice.