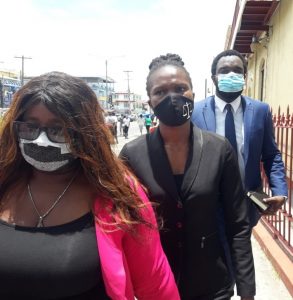 GECOM official Sheffern February and her Attorneys-at-Law Latoya Roberts and Eusi Anderson as they left the Georgetown Magistrates’ Court.

Information Technology Officer at the Guyana Elections Commission, Enrique Livan and Registration Officer, Sheffern February were today released on a total of GYD$450,000 bail in connection with alleged electoral offences.

Attorney-at-Law Latoya Roberts told reporters that Ms. February was charged with two counts of attempting to defraud the people of Guyana by reading the wrong numbers from Statements of Poll in the March 2, 2020 general and regional elections.

The lawyer says Mr. Livan was charged with manipulating the numbers on the Statements of Poll that were recorded in the system so that they reflected fraudulent numbers for Region Four resulting in the recording of fraudulent results.

Lawyer Roberts says Mr. Livan and Ms. February were not required to plead because the charges were indictable. They are to return to court on September 25, 2020 by which time statements are expected to be served to the Defence team.

Attorney-at-Law, Eusi Anderson says  Chief Magistrate Ann Mc Lennan overruled State Prosecutor, Teriq Mohammed’s request that no bail be granted. “The magistrate believed that the evidence and the allegations made by Mr. Teriq Mohammed were inadequate insubstantial to refuse to grant my clients bail,” he said.  “We are pleased, we are relieved, blessed by her ruling,” said Mr. Anderson.

The other members of the defence team are Trinidad and Tobago Senior Counsel , John Jeremie and prominent Guyanese Attorney-at-Law, Nigel Hughes.