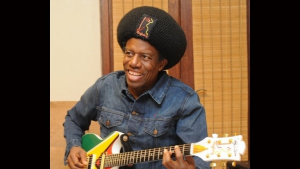 Guyanese superstar Eddy Grant is taking legal action against the Donald Trump campaign team for unauthorised use of his 1983 US chart topping hit ‘Electric Avenue’, LOOPTT News reported on Sunday,

According to a press release from Grant’s team, the animated video which was posted to the personal Twitter account of Dan Scavino, White House Deputy Chief of Staff, plays unflattering audio quotes from Biden set to the tune of ‘Electric Avenue,’ as reported by Celebrity Access.

Grant, who is based in Barbados, said: “In my particular case, they have sought to encapsulate my intellectual property into derogatory political rhetoric, further encapsulated in a video production that can only be construed at best as being wicked, thereby causing me considerable emotional distress.”

On August 13, Grant’s legal counsel, Wallace E.J. Collins, issued a cease and desist letter to the Donald Trump campaign team stating that Grant is the singer/songwriter and sole and exclusive rightful copyright owner of the musical composition and sound recording of ‘Electric Avenue’.

In his letter, Collins said: “You have made an unauthorised use of our copyrighted work in connection with the political campaign of Donald Trump.”

“As a result of your wrongful unauthorised Infringing Use in connection with your controversial political campaign, substantial damage and irreparable harm has occurred and will continue to occur to my client and his reputation as an artist when affiliated in any way with your campaign.”

Collins said that as an artist, Grant has always had a reputation for standing for truth and justice for all and that this will be seriously undermined by any affiliation with the name Trump, in this political context.

“Such damage will extend to the value of my client’s musical catalogue,” he added.

According to Collins, the Trump campaign team neither asked for nor received permission to use the work (Electric Avenue) under U.S.C. Section 101 et seq., and that they should be held liable for statutory damages as set forth in Section 504 (c)(2) therein.

Collins is demanding that the Trump campaign immediately cease and desist from any further use “or exploitation” of the song.

He also demanded that the Trump team “hold any monies arising out of or relating to your campaign and attributable to the infringing use of ‘Electric Avenue’, until “the matter is fully and fairly resolved.”

Collins said: “We prefer to resolve this dispute expeditiously, in order to avoid time consuming and costly litigation and the negative publicity that can surround the unauthorised use of such an iconic musical composition especially where the use indicates a fundamental misunderstanding of the very meaning of the underlying work (Electric Avenue).”