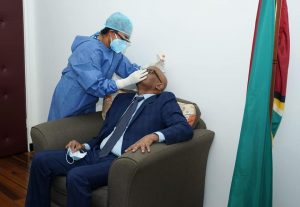 Vice President Bharrat Jagdeo being tested for the coronavirus

President Irfaan Ali, several government ministers and other top government officials are late Thursday expected to get results of their COVID-19 tests, even as Suriname’s President Chandrikapersad Santokhi and his top officials who held talks in Guyana have been cleared of the viral disease.

Meanwhile Starnieuws reported that President of Suriname Mr Chandrikapersad Santokhi, his wife, Foreign Affairs Minister Albert Ramdin and others who met with Guyana’s Foreign Minister Todd, were tested negative. Mr Santokh and his delegation had been in Guyana for President Ali’s inauguration. 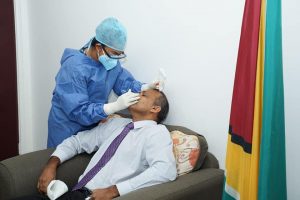 United States (US) Ambassador to Guyana Sarah-Ann Lynch has also gone into self-quarantine after coming into contact with newly-appointed Minister of Foreign Affairs and International Cooperation Hugh Todd who has tested positive for COVID-19.

The US embassy said in a statement Wednesday that Ambassador Lynch and the embassy community are committed to the protocols laid out by the Ministry of Health with regard to COVID-19 and has therefore taken steps in that regard.

“To that end, in light of the recent revelations from the Minister of Foreign Affairs, Ambassador Lynch and the Deputy Chief of Mission are both getting the PCR diagnostic test and will remain self quarantined until they are cleared by medical personnel,” the statement added.

On Wednesday, President Ali announced that Mr Todd had tested positive for the deadly COVID-19 virus and that all members of his Cabinet would have to be tested and work remotely. Following this announcement, all cabinet members were tested for COVID-19 as a precautionary measure. 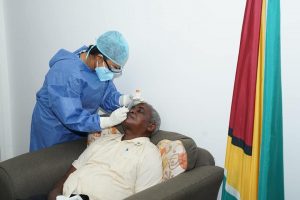 Dr Ali said Cabinet would be operating remotely, even as he appealed to Guyanese to join the fight against the pandemic that has so far claimed the lives of 22 people in Guyana since the first person tested positive here in March.

President Ali has stressed that COVID-19 is a global crisis that must be addressed frontally and declared that his government is taking a holistic and comprehensive approach which prioritises testing, provisions of personal protection equipment and inter-agency collaboration in response to the pandemic.

The president has urged citizens to follow the guidelines by the Ministry of Health, wear masks especially when in public places, and ensure that as far as possible to adhere to social distancing.

To date, Guyana has 623 confirmed COVID-19 cases and recorded 191 recoveries.