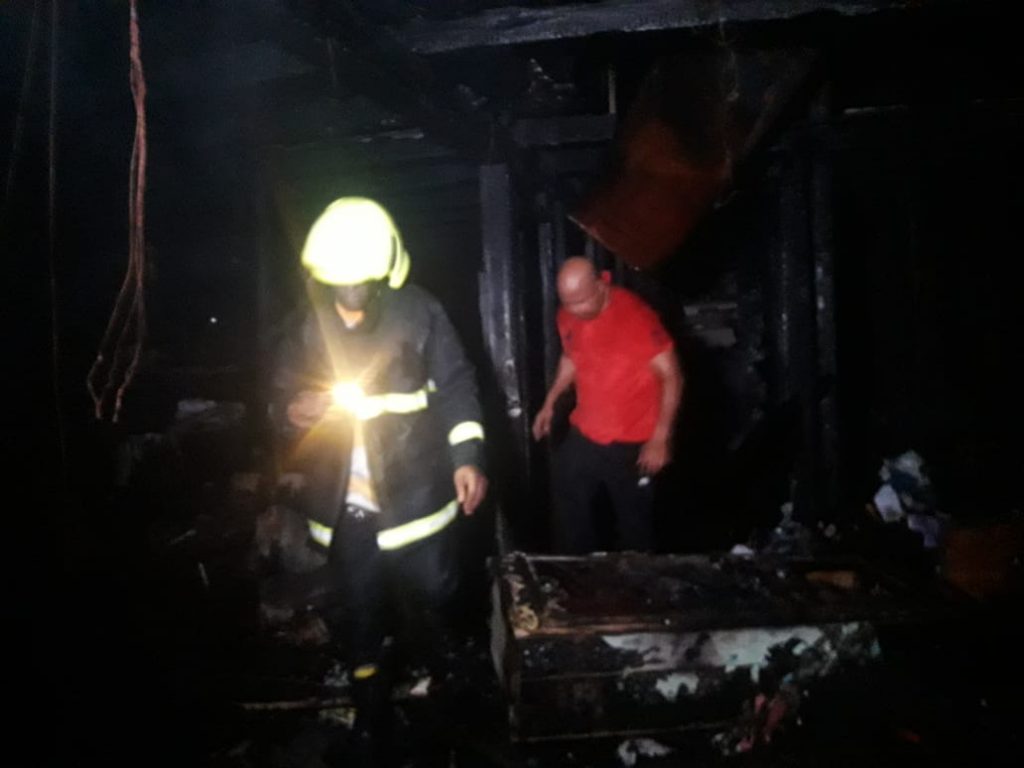 Principal of Chase Academy, Henry Chase, accompanied by a firefighter, walk through the rubble in his office.

Gifted Hands Learning Centre for Special Needs Children is located in the lower flat of  the same building which is owned Nadira Jaikaran-Hanoman.

The cause of the fire was not immediately known as the security guard on duty said there was no explosion or anyone seen or heard in or near the building before he saw smoke emanating from the office on the lower flat. Security guard, William Arthur said he was sitting on the corridor when he saw a lot of thick smoke from the bottom flat and he immediately turned off the main switch before going downstairs. “I took off some window panes and started to throw water but the water was inadequate and the fire still keep on blazing. I was hoping that I could have broken the door and go in and saturate the place but I couldn’t get the door open,” Mr. Arthur told reporters.

He said neighbours summoned the fire brigade and went into action.

However, the Principal and owner of Chase Academy suspected foul play and ruled out the fire being of electrical origin because no appliance was on and the electrical wiring was inspected. “When I left everything was secured. The office area that the fire occurred, we had no fan. Only recently, two days ago, the electrician checked the place because I am very conscious about fires and so on and I asked him to ensure that everything is ok,” he said. “The whole incident, it speaks of foul play,” Mr. Chase added.

Mr. Chase said students sitting the Integrated Science examination would not be affected as they would be using the Westfield Primary School that is located in the same compound. He was also confident that Chase Academy would reopen at the start of the new academic year. “I know for a fact that we are going to bounce back and we are going to be ready for the reopening of school

Fire fighters reportedly arrived on the scene a bit late when the building was engulfed in flames, but once they sourced and began pumping water from the nearby Cummings/ Cowan Street canal they quickly brought the fire under control.

None of the nearby buildings was affected by the fire.

After the fire was extinguished, the Principal of Chase Academy, accompanied by a fireman, entered the office where equipment, documents and furniture were destroyed.

Chase Academy is well-known for its very high record of academic achievement, in some instances by students who needed special attention. The school has also been consistently doing well in a number of sporting disciplines.