Full cabinet to be appointed this week- President Ali 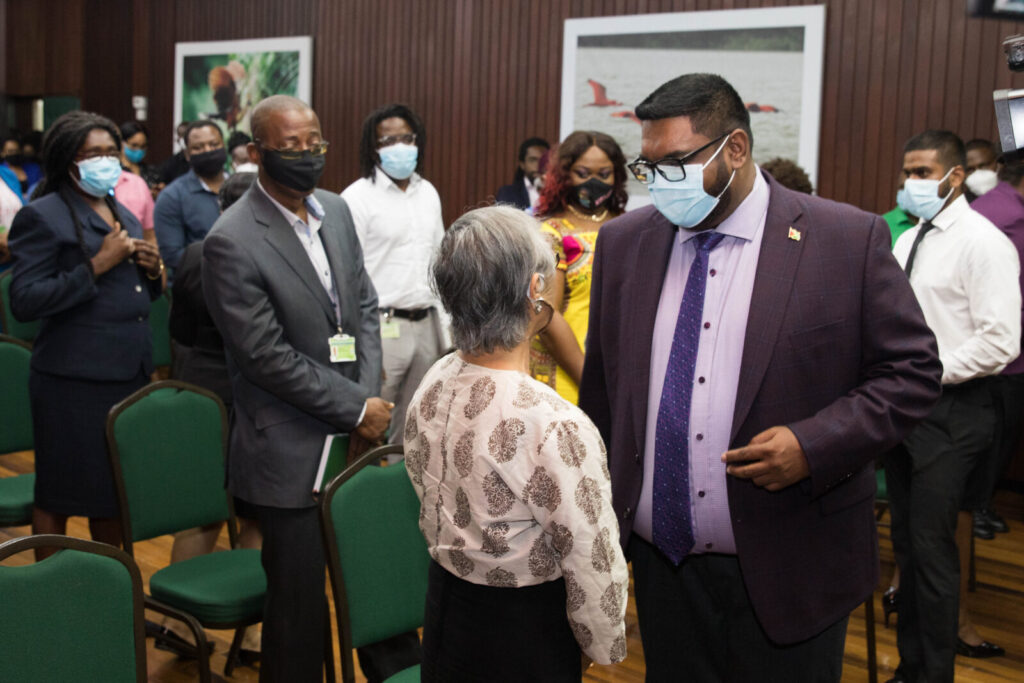 President Ali interacting with staff of the Office of the President.

With four ministers already appointed to serve the new People’s Progressive Party (PPP) government, President Dr. Irfaan Ali announced earlier Monday that the full cabinet appointment and establishment of various ministries will be made during the course of this week.

The new Guyanese head of state made this disclosure when he met staff at the Ministry of the Presidency, the official office of the president, as he started his first day on the job.

“Before the end of this week, we hope to have all the ministries established with the Cabinet Ministers appointed, the areas of responsibilities will have to be detailed and gazetted and then we can move towards a more general and broad discussion in relation to the priorities and the focus of the new Government,” he stated.

Following his swearing-in the president appointed Retired Brigadier Mr. Mark Phillips as Prime Minister, former President Bharrat Jagdeo as his Vice President, Anil Nandlall as Attorney General and Minister of Legal Affairs, and Gail Teixeira Minister of Parliamentary Affairs and Governance. Mr. Jagdeo was tasked with heading the transition of the government team.

A meeting with permanent secretaries from all the various ministries was scheduled to take place Monday.

Meanwhile, during the meeting which was attended by Mr. Phillips and Ms. Texiera, President Ali said that there will be changes of approach, new and emerging areas of responsibility and a shift in the plans and programmes of the new PPP government.

Nevertheless, he assured his staff that his government would be working in a “unified manner” so that all Guyanese could benefit from the resources of the country.

“This office is the highest office in Guyana and therefore the workers are expected to deliver the highest level of service at the higher standards…I expect all to reignite that we have to operate at a high standard and set the bar for the rest of the public servants,” he added.

Ali said the country requires the skills of all Guyanese to work in a collective manner to build a strong and sustainable Guyana.

Prime Minister Phillips told PPP supporters outside Freedom House on Sunday that an inauguration ceremony would be held on Saturday.