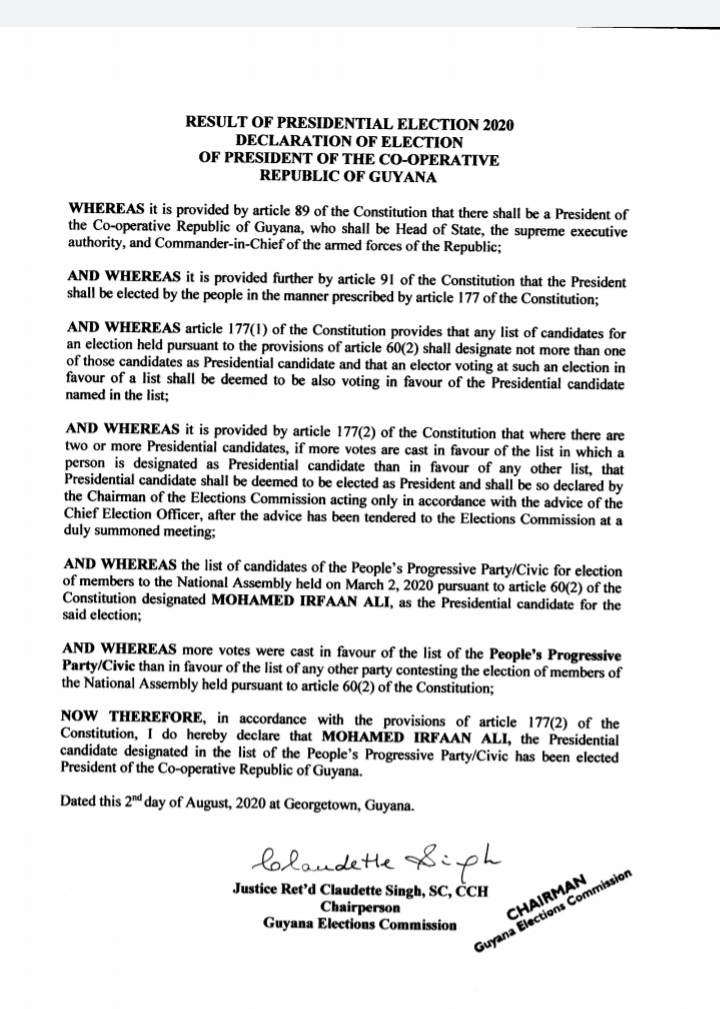 The People’s Progressive Party’s (PPP) Dr. Irfaan Ali was Sunday declared Guyana’s 9th Executive President by the Chairman of the Guyana Elections Commission (GECOM), bring to an end 153 days of political controversy mired in a series of court cases that went as far as the Caribbean Court of Justice (CCJ).

However, Chief Elections Officer Keith Lowenfield complied with reservation about the outcome of the 34-day national vote recount that the Guyana Court of Appeal last week reaffirmed he must use to submit his report to the Commission for a declaration of the March 2, 2020 election results.

“In accordance with Article 177(2)(b), it is worth restating that Order 60 of 2020 revealed that the numerical count of the ballots cast for each list of candidates does not reflect the true will of the elector,” he said in his report.

Mr. Lowenfield said the evidence provided with respect to voter impersonation has been verified by the relevant authorities by way of immigration records and deceased reports.

In an earlier declaration, Mr. Lowenfield had removed 115,000 votes on the basis that they were tainted with impersonation, irregularities and other anomalies but that was eventually scrapped by the Caribbean Court of Justice (CCJ).

Mr. Lowenfield is on GYD$450,000 bail for three private criminal charges of misconduct in public office, fraud and conspiracy to commit a felony.

The Chief Elections Officer told GECOM Chairman, Retired Justice Claudette Singh in keeping with her directive and the Certificates of Recount, he provided the calculation of seats.

Dr. Ali’s PPP got 33 of the 65 seats in the National Assembly with 233,336 votes, A Partnership for National Unity+Alliance For Change (APNU+AFC) 31 seats with 217,920 votes and the three joinder parties- A New and United Guyana, Liberty and Justice Party (LJP) and The New Movement – one seat with their 5,214 votes.

The three pro-APNU+AFC election commissioners – Vincent Alexander, Charles Corbin and Desmond Trotman- have since dissociated themselves from the declaration and restated the need for fresh elections. “We feel that every vote should be counted and no invalid vote should be allowed to impact the results. Any other approach will lead to another political saga in our country`s short but turbulent political history.  We are therefore distancing ourselves from any Declaration other than a non-declaration and fresh elections,” they said in a joint statement.

Ali,40, is the holder of a PHd. in Urban Planning from the University of the West Indies. He is also a former Chairman of the bipartisan Public Accounts Committee and a Minister of Housing, Water, Tourism and Commerce until 2015 when the PPP lost power to David Granger’s APNU+AFC. Dr. Ali’s qualifications had come into sharp focus during the 2020 election campaign after information had surfaced that  one of his supposed degrees had been issued from an unknown and un-accredited institution at Uitvlugt, West Coast Demerara.

Mr. Granger,75, accepted the consequences of GECOM’s declaration, a suggestion that he conceded defeat and said his coalition would be taking its electoral grievances to court after GECOM declares a winner in keeping with last week’s decisions by the Guyana Court of Appeal. “President Granger said that notwithstanding that declaration, the APNU+ AFC coalition maintains that the anomalies and irregularities which have been uncovered during the recount process cannot be accepted and will form the grounds for an election petition,”  the Ministry of the Presidency said.

Mr. Granger appealed for peace. “The APNU+AFC Coalition will challenge the declared results lawfully, peacefully and purposefully. The Coalition asks its members, supporters and friends – who have been patient throughout our campaign and a prolonged legal process in our Courts – to continue to conduct themselves in a lawful and peaceful manner.”