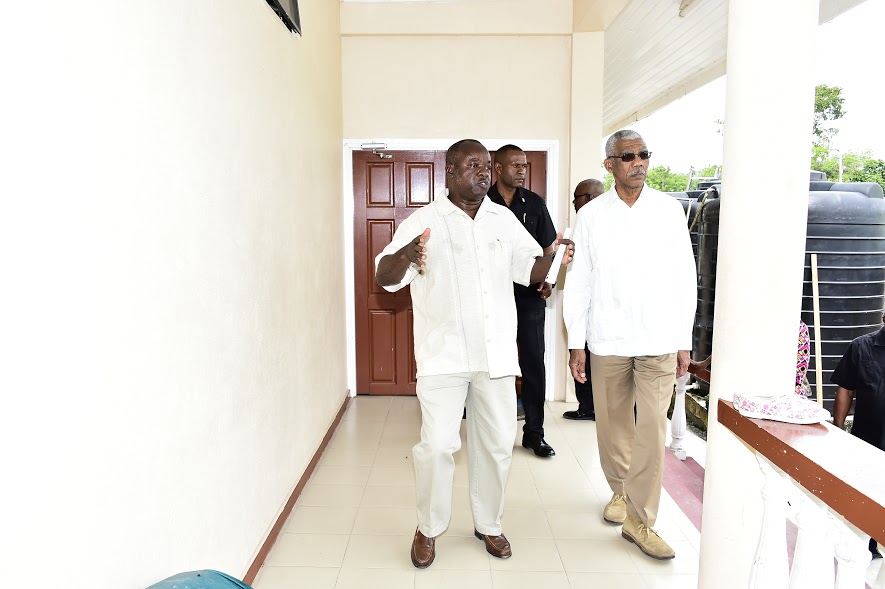 FLASH BACK: President David Granger is given a tour of the Madewini Training Centre by Presidential Advisor on Youth Empowerment, Mr. Aubrey Norton. (flash back)

Executive member of the People’s National Congress Reform (PNCR), Aubrey Norton on Wednesday dismissed the United States’ (US) imposition of visa sanctions on Guyanese officials who are blocking the declaration of election results based on the national vote recount data, vowing that the David Granger-led coalition would do everything to keep the People’s Progressive Party (PPP) out of government.

“I don’t think that the leadership of the APNU+AFC (A Partnership for National Unity+Alliance For Change) is afraid of sanctions,” he said. “For us, the most important thing is service to Guyana, not to the United States of America. We do accept that the UN (United Nations) is there and it’s a critical country but we will not sacrifice our decency, integrity and want for a government that is based on law and order for some American or Canadian visa,” he said.

The PNCR official reasoned that the US Secretary of State’s announcement was not coincidental with Chief Justice Roxane George-Wiltshire’s case management conference for a case that seeks to secure High Court rulings that the 10 district declarations are valid and should be used to declare the final results of the March 2, 2020 general and regional elections instead of the recounted, validated and certified votes. “I think it’s an attempt to put pressure on the judiciary. Judges could be considered high government officials and it is probably signalling to the Chief Justice that she should do what the United States wants or she will face sanctions. We hope that she continues to be a professional and she judges this matter based on law,” Mr. Norton said.

Mr. Norton denounced the sanctions against Guyanese officials and possibly their family members came several hours announced by US Secretary of State, Michael Pompeo. “You have Mr. Pompeo making threats. I believe our cause is just. I believe we must stay focussed on ensuring the People’s Progressive Party doesn’t come to power,” he said on the A Partnership for National Unity+Alliance For Change (APNU+AFC) Facebook page.

He urged Guyanese not to fuss too much about the visa revocations because officials have not violated any law but the US’ policy was “inconsistent.”

Restating the coalition’s position that the more than 30-day long recount exercise showed that the PPP committed electoral fraud, Mr. Norton said the “real defenders of democracy” is the coalition. “Our task is to ensure that no government comes to power by fraud,” he said.  Mr. Norton highlighted that  visas for PPP executive member, Clement Rohee and PPP presidential candidate had been revoked.

“We are not prepared to sacrifice our integrity and our interests for some issuance of visas . The stakes are too high for that,” Mr. Norton, a former University of Guyana Political Science lecturer, said.

Norton, a former foreign service officer, said the US now appeared to be disinterested in ensuring Guyana continues on the path of law and order in contrast to recent years when Guyana had been identified as a drugs transshipment point. He charged that the US  appeared to be taking a stand based on interests due to successful lobbying by the PPP-hired American firm, Mercury Public Affairs.

APNU+AFC has since hired an American lobbying firm to conduct work on its behalf similar to Mercury.