Ramjattan, Teixeira weigh in on motivation of spate of fires at govt buildings 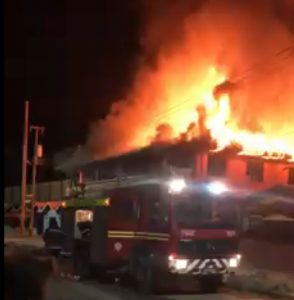 The GECOM office at Wismar.

Public Security Minister Khemraj Ramjattan on Tuesday did not rule out three early morning fires set on public buildings as being politically motivated.

Ramjattan told News Talk Radio/Demerara Waves earlier Tuesday that “out of an abundance of caution, I am awaiting reports from the Fire Chief (Marlon Gentle) and Police Commissioner (Leslie James) before making any comment on those incidents.”

He nevertheless stated that his Ministry will work with the discipline services to ensure that these matters are dealt with carefully and expeditiously.  “I expect every Guyanese to appreciate ownership of buildings that might be targeted. And it is to be condemned, the activity to destroy a public building,” he remarked.

Asked if this trend continues, if it would set the stage for a state of emergency, Ramjattan said, ” that’s a hard legal question… this would be a determination of the president.”

President David Granger had hinted that a state of emergency would have to be declared in Guyana to pave the way for the reconvening of Parliament and the approval of funds for Government spending, if the Guyana Elections Commission (GECOM) scraps the March 2, 2020 election. 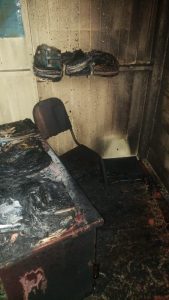 The burnt files at the CID office of the Anna Regina Police Station.

Minister Ramjattan said he is confident that the “police can control these things, and the discipline services and the citizenry.” He noted that the “greatest support” needed right now is from citizens “to keep their eyes out for buildings and places that could be possibly targeted…we need a vigilant society.”

Contacted for a comment, People’s Progressive Party/ Civic (PPP/C) executive Gail Teixeira said her party is actively monitoring the situation but they strongly believe that the fires were no coincidence and could be politically motivated. “I believe that this is an APNU tactic, to drive fear into people and it wouldn’t succeed. We know what they were capable of in the past but this is 2020 and not 1997 and 2001. It is basically fear tactics,” she added.

However, the former PPP/C government minister and presidential advisor said ,”people should not be unduly afraid and intimidated by these actions.”

An early morning fire destroyed the Criminal Investigations Department (CID) at the Anna Regina Police Station, while another was set at an abandoned Guyana Defence Force (GDF) building at Maria’s Lodge on the Essequibo Coast. Arsonists also burnt down the Region 10 GECOM Wismar, Linden office this morning.

Elections Commissioner, Vincent Alexander told News-Talk Radio 103.1 FM that the fire at the GECOM office would impact minimally. “All that they have is duplicated at the centre. District 10 is of little contention in the 2020 elections,” he said. 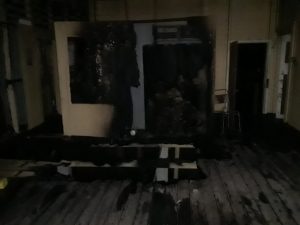 The GDF’s 1st Infantry Building on the Essequibo Coast.

Public Relations Officer of the Guyana Police Force Jairam Ramlakhan told this publication that no arrests have been made in any of the incidents and there are no suspects at this time.

GECOM Chair Claudette Singh on Monday set aside 10 district declarations and ordered Chief Elections Officer Keith Lowenfield a third time to submit his report using figures from the national vote recount. If Lowenfield refuses to follow those instructions by 14:00 hrs today, the Chair has reportedly decided that the Deputy Chief Elections OFficer Roxanne Myers will be instructed to use that data to compile the report instead and submit the same to the commission. This will pave the way for the PPP/C to be declared the winner.

Earlier this month, arsonists set fire to the Suddie Magistrates’ Court but alert policemen confined that blaze to the Magistrate’s chair in the courtroom.