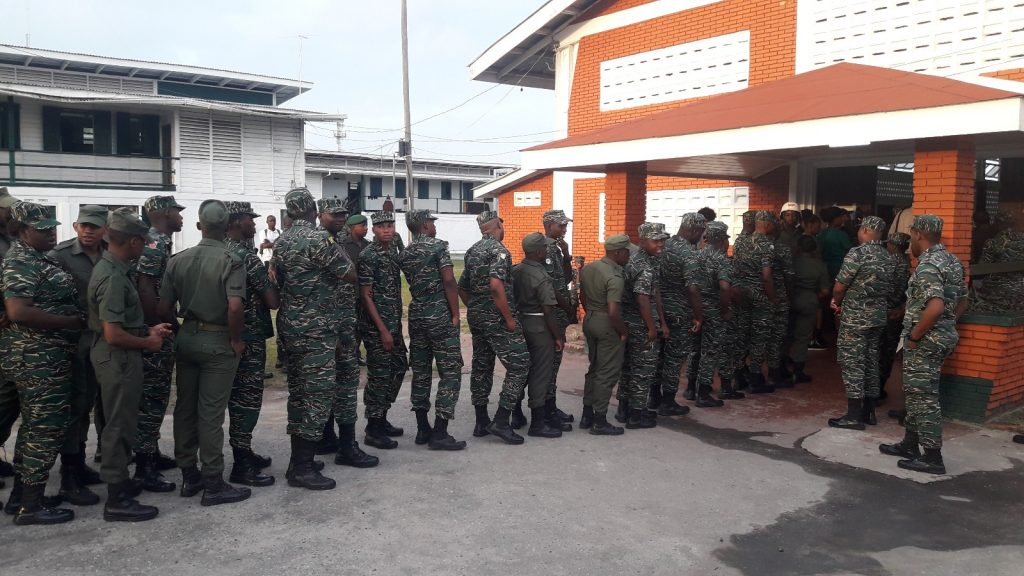 Soldiers of the Guyana Defence Force casting their ballots at Camp Ayanganna.

Even as A Partnership for National Unity maintains that opposition People’s Progressive Party (PPP) polling day officials robbed the coalition of many Joint Services votes, the Guyana Elections Commission (GECOM) has so far refused to say how many unstamped ballots are there so far.

APNU officials have maintained that many of the 8,000-odd votes that were cast by police, soldiers and prison service personnel were rendered invalid because PPP polling day officials did not affix the six-digit stamp on them.

Despite repeated requests throughout Friday, GECOM spokeswoman Yolanda Ward did not answer journalists’ questions about how many of unstamped ballots have been found since the recount began on May 6.

Unofficial results by the small political party, The Citizenship Initiative, on its website https://guyanaresults.com/ show that up to Friday evening,  2,673 of the 287,358 votes recounted so far were classified as rejected.

TCI Presidential candidate, Rondha-Ann Lam said she has so far not seen any box with more than 21 rejected ballots. The official said ballots were being rejected for a number of reasons including marked for multiple parties, no mark, or the intended preference was unclear

APNU General Secretary, Joseph Harmon has claimed that many of the Joint Services votes were for the incumbent coalition, but the GECOM spokeswoman said “there is no way to identify electors by way of ballots cast.”

She reminded that Joint Services ballots are not stamped on their voting day and are intermixed at selected polling stations in each region on polling day when civilians cast their ballots.

Ward indicated that there was no hard evidence to prove that unstamped ballots were those cast by member of the Joint Services also known as Disciplined Services (DS).

“Those ballots should be stamped at the respective polling stations and mixed with those cast at the polling station for counting. During the recount, it was found that some stations where there were intermix, a number of ballots were not stamped. The analogy was that those were possibly DS ballots that may not have been stamped before intermix,” she said.

TCI, which makes it clear that GECOM is the sole authority to declare results, says on https://guyanaresults.com/ that up to Friday evening A New and United Guyana (ANUG) won 868 votes, APNU+AFC 87,208, Change Guyana 873, Liberty and Justice Party 1007, PPP 113,556, People’s Republic Party 361, The Citizenship Initiative 262, The New Movement 88 and United Republican Party 154.

2020-05-29
Denis Chabrol
Previous: GECOM sets June 16 for declaration of election results from recount if recount data is used
Next: No total lockdown- Harmon