The People’s Progressive Party (PPP) on Saturday publicly warned the Chairman of the Guyana Elections Commission (GECOM), Retired Justice Claudette Singh that the electoral authority would be violating the Constitution and law if they go ahead and investigate alleged voter fraud.

“GECOM cannot convert itself into court and hold a trial to determine allegations of illegal voting and dead people voting,” Nandlall told a press briefing ahead of dispatching a letter to Singh on Sunday.

Nandlall, a former Attorney General, was reacting to a report in the government-controlled Guyana Chronicle newspaper quoting her as having formally inviting APNU+AFC’s election agent, Joseph Harmon to submit evidence to support claims that are being made in observation reports during the recount that people voted in the names deceased persons and others who were not in Guyana on elections day, May 2, 2020. “I wish to request for your party to formally submit evidence in relation to the objections, particularly as they relate to deaths and migration,” Singh told Harmon in the letter dated May 22, 2020. She added that “the submission of evidence will inform the deliberations at the level of the Commission.”

But Nandlall stressed that Article  163 of the Guyana Constitution  clearly provides for any allegation or unlawful act, omission or wrongdoing or any other election-related illegality to be addressed exclusively by an elections petition to the High Court under the National Assembly Validity of Elections Act. 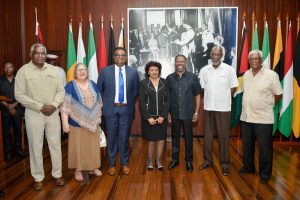 He sought to assure that the PPP was not afraid of any disclosures during a  probe by GECOM, but said the only competent forum is the High Court. “It is not that we are opposed or we have anything to hide but this exercise is simply not one that caters for that and anytime GECOM goes outside the scope of that recount, GECOM will be acting illegally and will violate the same order,” he said.

“I want to reiterate that the PPP has nothing to hid e and the PPP is not afraid of any form or any type of scrutiny but we cannot allow this process to be bastardised and be used for a purpose for which it was not conceived and birthed because to do so we would be acting unlawfully, GECOM would be acting unlawfully and the whole exercise will be bereft of chaos and confusion,” he said.

The PPP Executive Committee member insisted that the recount is being done in keeping with the Representation of the People Act and the gazetted recount order which does not provide for allegations to be made or “worse yet for there to be some proving and disproving of hose allegations.”

“The Chairperson, by inviting evidence, is lending credence and expanding the scope of the recount far outside of its parameter and that is wrong, it is illegal,” he said. “”The constitution does not invest in GECOM the power to investigate allegations, to hear allegations, to prove and to disprove of the type that are being made. Those are issues that the Constitution vests in the preserve of the judiciary exclusively and it must be ventilated in accordance with the National Assembly Validity of Elections  Act and the vehicle is an election petition,” he added.

Nandlall said the validity of the recount was addressed in APNU+AFC candidate, Ulita Moore’s request for a judicial review of the recount by the High Court, Full Court and the Court of Appeal in which it was decided that GECOM has the authority to proceed with the recount under its own management and supervision

The order provides for the politically divided GECOM to decide whether the data from the recount can be used by the Chief Elections Officer to submit a report to the said commission for certification and declaration of the results.

The GECOM Chairman has already refused to scrap the controversial  Region Four declaration or any of the other nine declarations that were made by the 10 Returning Officers. Pro-coalition Elections Commissioner, Vincent Alexander has said those declarations were still legal and would be replaced by the results of the recount.

In recent days, the incumbent A Partnership for National Unity+Alliance For Change (APNU) has intensified its arguments, with some statistics that so far question the validity of just over 1,500 votes, to discredit the results. At the same time, the coalition has said it would be for the commission to determine the credibility of the polls based on the evidence that would be provided.

President David Granger has said he would  accept “any” and ‘whatever” declaration that GECOM makes.

2020-05-23
Denis Chabrol
Previous: Eid-ul-Fit’r is Sunday… Muslims urged to help unite Guyana, pray for “courageous agents of mercy” during COVID-19
Next: GECOM must use recount to declare election results; objections are for a High Court elections petition