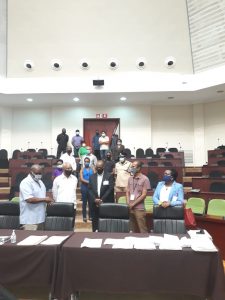 President David Granger and his delegation on a visit to the tabulation centre.

On arrival at the Arthur Chung Conference Centre at 8:56am, his temperature was checked by one of the doctors on duty as part of a routine check for all persons entering the building.

Members of his political team on the visit are APNU General Secretary, Joseph Harmon and AFC Chairman, Raphael Trotman among others.

AFC Executive Member, Cathy Hughes, who was at the centre briefly, said Granger was expected to meet with the three-member Caribbean Community (CARICOM) observer team.

Pictures released by GECOM show that he visited a workstation and the tabulation centre and had a conversation with one of two Organisation of American States (OAS) observers.

The recount is being observed by the OAS, Private Sector Commission and the United States- aligned American Chamber of Commerce-Guyana.

President Granger’s visit to the centre where more than 400,000 votes are being recounted came one day after APNU executives said there is no law for results of this recount to be accepted by GECOM to declare results of the March 2, 2020 general elections.

Instead, they said GECOM needs to use the legal 10 declarations by the regional returning officers to declare the long overdue results after which aggrieved parties can challenge them through an elections petition.

The gazetted recount order provides for the politically-divided GECOM to decide on whether the Chief Elections Officer should use the data to submit a report to the Commission for the declaration of the results.

The opposition People’s Progressive Party is maintaining that the recount must be used to declare the results, but APNU+AFC executives have said they are merely to uncover fraud and determine the credibility of the elections.

Previous: APNU+AFC says recount cannot be legally used to declare election results
Next: Granger says will accept “any” declaration made by GECOM