Granger says will accept “any” declaration made by GECOM 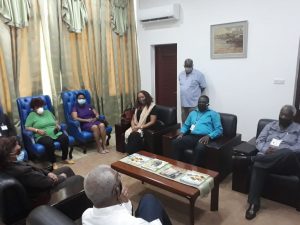 President David Granger meeting with the CARICOM team of scrutineers.

President David Granger on Sunday said he would accept any declaration made by the Guyana Elections Commission (GECOM) to determine the outcome of the March 2, 2020 general elections.

“Whatever declaration is made by the Chairman of the Elections Commission will be regarded as legitimate by the Coalition,” he told reporters.

That was his response to whether he would accept the results coming out of the national recount.

When asked to react to Attorney General, Basil Williams’ saying there is no legislation governing the recount through this process by GECOM, he said, “As President of Guyana and leader of government it is my policy that any declaration coming from the Chairman of GECOM (Justice Claudette Singh) will be accepted by the government of Guyana. I speak for the Government of Guyana.”

The politically-divided seven-member GECOM on which Chairperson has the casting vote first has to decide whether the Chief Elections Officer should use the data to compile a report for the said Commission to certify and declare the results. Singh has already refused a request by the opposition to quash the controversial Region Four declaration by Clairmont Mingo. Pro-government Election Commissioner, Vincent Alexander has said the 10 regional declarations by the Returning Officers are legal but are held in abeyance.

Granger said he held confidential discussions with GECOM Chairperson Singh in the presence of the three-member Caribbean Community (CARICOM) team of scrutineers. He declined to disclose the nature of those talks, opting to leave that to the commission to disclose.

He spoke with reporters after visiting the recount of votes cast in the March, 2020 general and regional elections.

Granger visited a number of counting stations and the tabulation centre at the Arthur Chung Conference Centre at Liliendaal.

He held discussions with the three-member team of CARICOM scrutineers.

He later held a meeting with top executives of the governing coalition of A Partnership for National Unity+Alliance For Change at the National Aquatic Centre.

His visit came one day after prominent members of his People’s National Congress reform party said the recount could not be legally used to declare a winner.

Instead, they said the Chief Elections Officer’s report from the 10 declarations must be used to do so after which aggrieved political parties could file elections petitions in court.