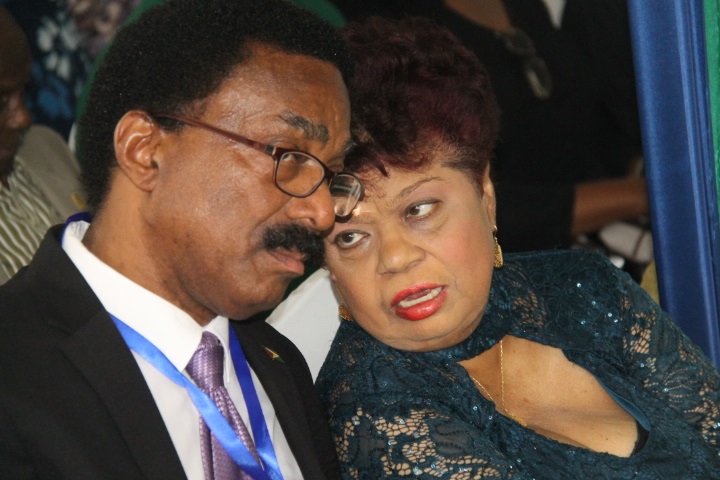 Former Chairman of the People’s National Congress Reform (PNCR), Basil Williams on Saturday said Guyana’s laws do not provide for the recount of votes before election results are declared, but his party’s General Secretary, Amna Ally shortly after said the vote recount would be final.

“All 10 declarations are valid and subsisting and under our law, the only way they could be rendered nugatory is by a decision of an election petition and so it comes to the other status, question and purpose of the national recount,” Williams said. He said GECOM was not empowered to nullify the 10 declarations including the one from Region Four by Returning Officer, Clairmont Mingo. “The electoral law has already said ten legitimate declarations have been made, they have been laid over to the CEO (Chief Elections Officer). That is the law,” he said,

“Most certainly! Whoever the Commission declares, so be it. That’s the person or the party. Why would we object to it? We signed on, we wanted this,” Ally said.

Williams said Section 22 of the Elections Laws (Amendment) Act, cannot deal with old issues to reverse concluded decisions such as the 10 declarations that have been already presented to the Chief Elections Officer, Keith Lowenfield . Williams said the two remaining steps in Guyana’s electoral system are Lowenfield’s submission of a report to the Commission for a final declaration to be made.

“Only an election petition could discredit them (the election results),” he said.

Ally then sought to recant her position after she was informed of Williams’ position. Candidate for the PNCR-led coalition of A Partnership for National Unity+Alliance For Change (APNU+AFC), Attorney-at-Law Roysdale agreed with Williams, currently Guyana’s Attorney General.

“As an Attorney-at-Law, I share the view of Mr. Basil Williams,” Forde said. He added that GECOM’s decision to recount the ballots cast in the March 2, 2020 elections is an independent decision by the commission. “Whether it is legal or not, we are entitled first as as lawyers second as a party to take a position contrary to that. Nevertheless, also we are entitled to participate in the process  and to make meaningful contributions to the process at each step of the way,” he said.

Forde said there is an ongoing debate in the Commonwealth and a number of persons has contacted him on the question of whether a recount should be done before a declaration after which an election petition is filed.  He said the recount would be final but that does not mean that the outcome would necessarily be accepted after an analysis. “In terms of finality ane what t decide on way or another , yes! In terms of consequential steps, our party can’t take a position on that right now,” he said.

Briefing the media after meeting with the seven-member Guyana Elections Commission (GECOM), Ally said she informed that management authority that “we have substantial evidence” – death certificates-of people who voted in the names of deceased persons and emigrants. However, she joined an increasing list of APNU+AFC executive members who said they had no actual number of votes that they believe should not be counted due to electoral fraud.

After boasting that APNU+AFC’s “properly trained” agents had done a lot of political work across Guyana and was aware of emigrants, who were not in Guyana but they voted and “we also know who are the dead”, Ally said the PPP got the upper hand on polling day. “We did not expect the PPP to pull a stunt like that on us, on these elections and so we did not prepare anyone to go looking or to go after that, but we know,” she said.

Polling agents, she said, ticked off voters in polling day and those lists were used to verify whether GECOM had ticked off the names of emigrants. At the same time, she said her party was obliged to work with the “only official list” of voters being used by GECOM. She called on GECOM to go to the Immigration Department to obtain the records.

Ally added that only GECOM’s Statements of  Poll (SOPs) are authentic and anyone has to use to it. “Because we know that the recount is the recount and that we have gone past the SOPs , we are not going back to waste time on that,” he said.

President David Granger and Opposition Leader, Bharrat Jagdeo had in March agreed to a national recount after local and international observers had expressed grave concern about the tabulation of results for Region Four.