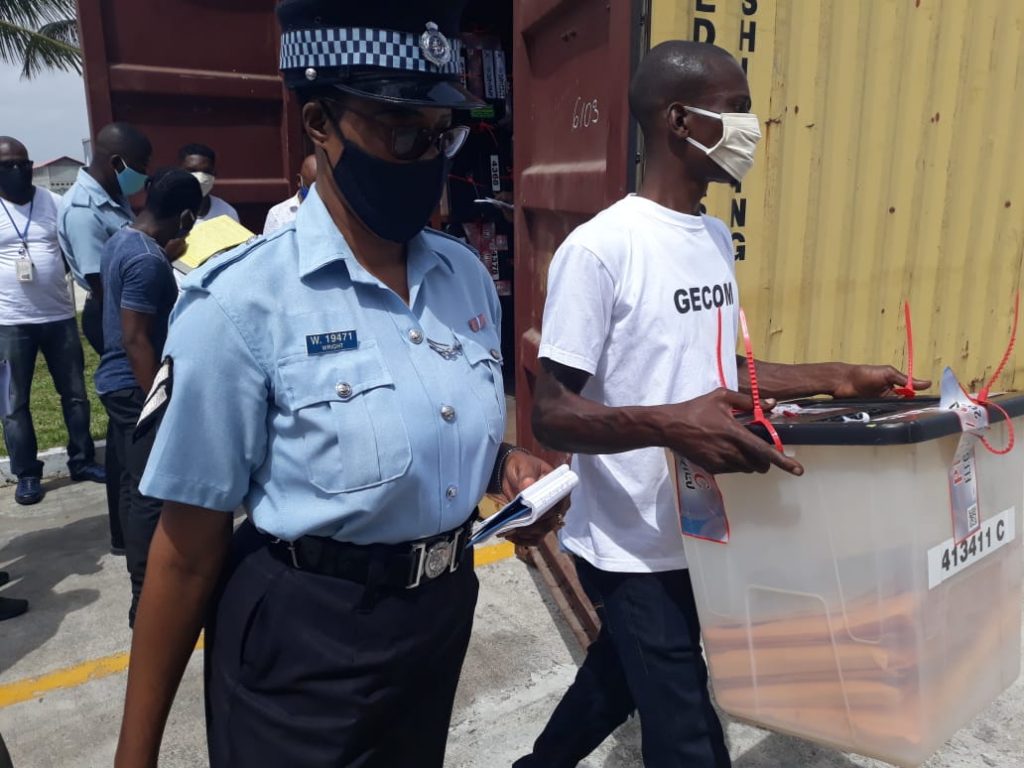 A policewoman escorts a GECOM official with a ballot box from one of the shipping containers that has more than 2,300 ballot boxes from across Guyana.

The Guyana Elections Commission  on Wednesday morning began the long-awaited national recount of all votes cast in general elections held on March 2, 2020.

Security was tight. Police deployed sniffer dogs to check for explosives in vehicles.

Except for diplomats, the Chief Elections Officer and Election Commissioners, everyone else was subjected to strict security checks.

Even a set of meals for People’s Progressive Party (PPP) representatives were each opened and checked by police at the security hut.

The media were barred from entering the compound of the Arthur Chung Conference Centre, Liliendaal, venue for the recount.

The recount is being monitored by diplomats and observers from the Private Sector Commission, locally-based representatives of the Organisation of American States (OAS) and the American Chamber of Commerce-Guyana.

Heightened security and opening containers account for late start. GECOM began the national recount at about 10:30 this morning.

Spokeswoman for GECOM Yolanda Ward says stringent security measures to avoid a repeat of the kind of upheaval that took place at the region four returning officer’s office back in March. 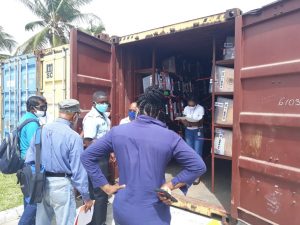 A shipping container that was opened in the presence of representatives of political parties and GECOM officials.

The GECOM spokeswoman says the recount has begun and compliance with the work plan by all stakeholders is expected to avoid a ruckus. “The police is present at every workstation.  We do not hope or we do not anticipate any disruption. The process is clear. Everyone has been briefed and so the expectation is compliance and cooperation,” he said.

Ms. Ward says its day one of the recount and as the staff gathered momentum a smoother flow and early start is expected on Thursday.

PPP representative, Juan Edghill told reporters that all his party was interested in is for the numbers on the Statements of Poll to match those that will emerge from the count that is expected to last 25 days.

A three-member team of scrutineers is also overseeing the recount and may be asked to offer their opinions as may be required. They will also submit a report to GECOM at the end of the exercise.

Edghill said the PPP was unhappy with one of the provisions in the Recount Order for the seven-member GECOM to determine whether the data from the recount should be considered by the Chief Elections Officer to compile a report and send it back to the Commission for certification and declaration of a winner.

The already declared results for the 10 electoral districts have been held in abeyance but are still considered legal by GECOM. The Chief Elections Officer has already used those results , compiled and submitted his report to the GECOM Commission Chairman for her to convene a meeting.

However, she has not done so and has, instead, stuck with her commitment to the public and the court for a recount to be conducted.