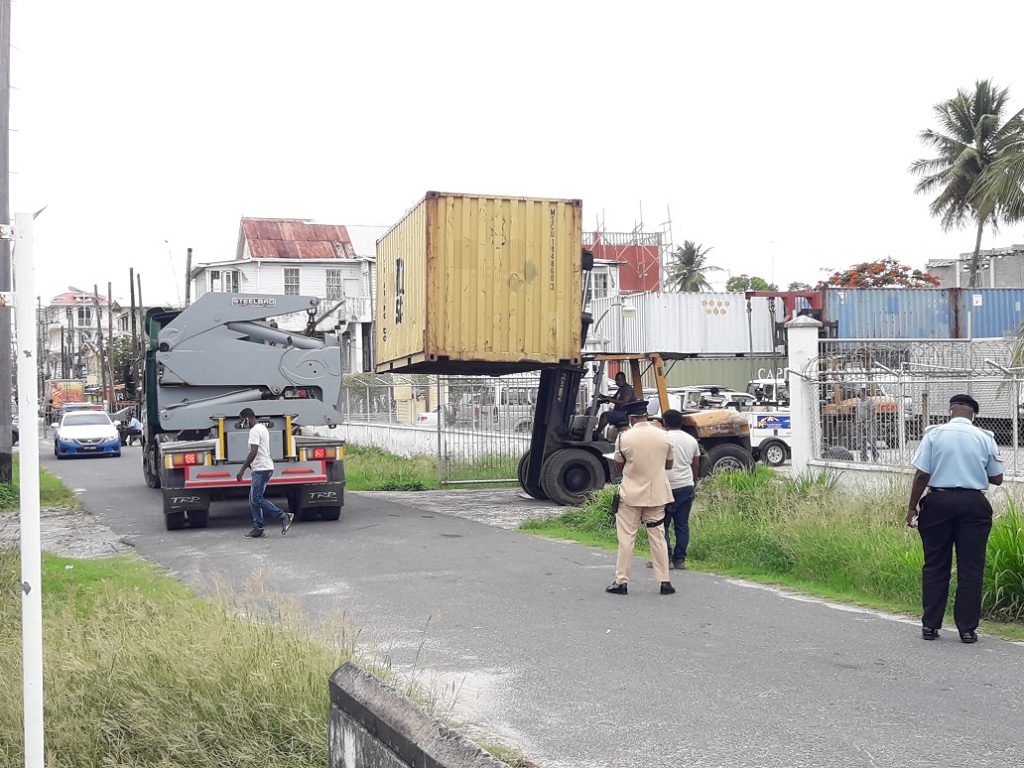 Shipping containers being removed from the GECOM headquarters =, Kingston, Georgetown and taken to the Arthur Chung Conference Centre, Liliendaal.

The Guyana Elections Commission (GECOM) on Tuesday morning began moving more than 400,000 ballots from its headquarters at Kingston, Georgetown to the Arthur Chung Conference Centre at Liliendaal where the national recount is expected to begin on Wednesday.

The first two or more than 12 shipping containers left GECOM’s headquarters, Kingston at about 9:01 AM under tight escort by heavily armed police from the Tactical Services Unit (TSU).

Representatives of the People’s Progressive Party (PPP) and other small parties witnessed the departure.

The Chief Elections Officer, Keith Lowenfield was among GECOM officials who were in the yard supervising the movement of the recount exercise.

The recount is expected to take at least 25 days under the scrutiny of a three-member Caribbean Community (CARICOM) team, political party representatives and GECOM officials.

President David Granger on Monday welcomed the arrival of the CARICOM to team to witness the recount process, but he made no mention of international observer missions like the Carter Centre whose request for permission to return to Guyana has been, according to the American embassy, been refused.  “I am pleased to learn that a CARICOM High-Level Team has arrived in Guyana to observe the recount process in response to the Commission’s request. The Elections Commission must be allowed to do its work in accordance with the Constitution,” he said.

Granger maintains that the elections were “free, fair and orderly” and that he will accept the results based on GECOM’s declarations to allow for a democratically elected government to take office. Local and international observers and opposition political parties have all said the tabulation of the votes in Region Four were not credible and transparent, and they all warned of international sanctions.

Before the departure of the observer missions from Guyana days after the March 2, 2020 general elections, Foreign Affairs Minister, Karen Cummings had gone to the Region Four Returning Officer’s Office and signaled that their accreditation could have been withdrawn.

GECOM has decided to hold the 10 declarations, which it says are “legal”, in abeyance until the recount is completed. The Recount Order that was published in the Official Gazette on Monday provides for the seven-member politically divided GECOM to decide whether the data from the recount should be sent to the Chief Elections Officer for him to compile a report and send it back to the Commission for the eventual official declaration of a winner.