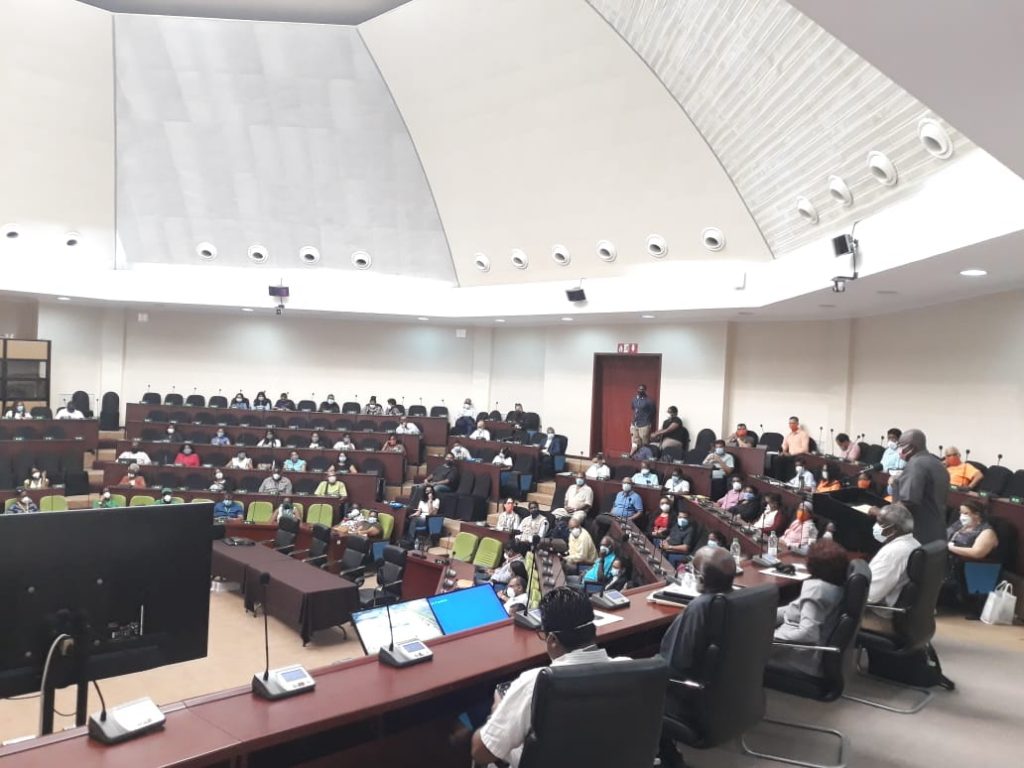 GECOM officials meeting with party representatives and observers on Wednesday just before the start of the national recount of general and regional council elections.

The recount of votes cast in the March 2, 2020 general and regional elections dragged on Wednesday afternoon, with just about 22 boxes declared from which a small number of discrepancies were found, according to well-placed sources.

The recount on Day 1 of the exercise at the Arthur Chung Conference Centre began two and a half hours later at 10:30 AM. By lunchtime for most workstations, only eight boxes were declared, the sources said.

Asked if Wednesday’s declarations so far took account of spoilt, rejected or extra ballots, the source said “yes” but “they were marginal”. Informed predictions are that based on current trends, the  difference in votes is not expected to surpass about 500 votes. However, A Partnership for National Unity+Alliance For Change (APNU+AFC) representative, Ganesh Mahipaul, who is examining votes cast at Region Three, said the exercise has unearth some anomalies and cumulatively, they could make a difference. “Though it may look as though it is one polling station, and one may want to conclude that because APNU+AFC got just one vote  and just two came off from the PPP may be minute but when you look at from a holistic perspective, if the APNU+AFC is to get one vote from every box, you are talking about 2,000 plus votes and if the PPP is too lose two votes or one vote from every ballot box, you are talking about 2,000 plus votes so clearly there were issues in these ballot boxes and regardless of the discrepancy, you must take note of it,” he said.

Mahipaul said he was concerned about the absence of a poll book for Region Three, which was later made available after “constant objections and some of the errors we were finding”.

GECOM Commissioners are likely to brief reporters  some time later Wednesday after Day One of the recount comes to an end.

APNU+AFC candidate, Coretta Mc Donald corroborated that the recount was up to lunchtime quite orderly. “Earlier, the mood was very tense but as the process started and we we began moving through, the tension began simmering down,” she told reporters.  She said two minor issues were resolved very quickly at station seven over the validity of votes based on how people had marked the ballot to vote for parties of their choice. ““Other than that, the process at station seven went very smoothly. Persons accepted the count as they were. So far so good and I am looking forward to what is going to be happening this afternoon and the rest of the week,” she said.

One of the highest points of tension was a shouting match between APNU+AFC representative, Carol Joseph and  People’s Progressive Party (PPP) representative, Ganga Persaud who objected to a clarification she was seeking from a GECOM official at her counting station.

Tallying will be done for presidential/parliamentary elections and then regional council elections. There are 2,339 ballot boxes containing more than 400,000 votes.

The votes have been already counted, results declared and provided to the Chief Elections Officer, Keith Lowenfield who has already compiled and submitted his report to the GECOM Chairman, Retired Justice Claudette Singh. However, she has declined to put that report before the seven-member commission for certification of the results as APNU+AFC as the winner.

The recount is being conducted against the background of concerns by the PPP and threats of sanctions by the United States, Britain, Canada and the European Union if the elections do not reflect the will of Guyanese.

Although the Carter Center’s representative was not allowed to travel to Guyana to observe the recount, there were other local and international observers. GECOM spokeswoman, Yolanda Ward said on Wednesday there were 91 party agents, and 14 observers from the European Union, Canada, Organisation of American States (OAS), Ethnic Relations Commission (ERC), American Chamber of Commerce – Guyana, CUFFY 250 and the Private Sector Commission (PSC).