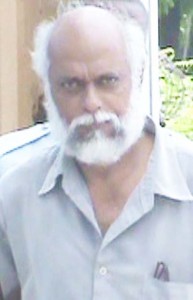 Former school principal, Sir  Arthur Chandra, was robbed of cash and jewellery at gunpoint during an invasion of his Bel Air Park residence, police said.

The incident occurred at about 1:30 AM when a man pointed a gun to his head and demanded that he hand over gold and money he had in his house. While the gun was pointed at his head, he told police that other perpetrators ransacked his house and stole the items.

Chandra alleged that the robbers left the house through a door that they opened with his keys.

Investigators have since questioned several persons but with no useful information acquired, they were expected to turn their attention to surveillance video footage.

The robbers entered the bottom flat of the house by prising a northern window.