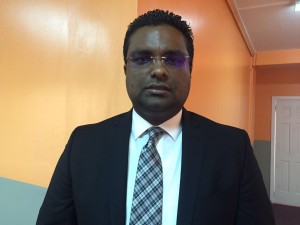 Pro-coalition elections commissioner, Vincent Alexander has rubbished claims by his People’s Progressive Party (PPP) counterparts that he was plotting to derail the recount of votes cast in last month’s general elections, saying that they also recognised the existence of the 10 declarations.

Referring to PPP election commissioner, Sase Gunraj’s then draft motion for the declaration of results by the 10 Returning Officers to be struck out from the records of the Guyana Elections Commission (GECOM), Alexander noted that that PPP commissioner’s sponsored initial submission had “recognized the existence of 10 declarations, albeit a failed attempt was being made to set them “aside”.

“Yet I am accused of plotting, as if I am the one seeking to make the Order legal in pursuit of an ulterior motive. The Declaration has never been declared illegal,” he said.

PPP Executive Member, Anil Nandlall’s claim that Alexander was setting the stage to scuttle the recount came against the backdrop of he (Alexander) saying that eventually GECOM would decide whether the declarations would be used.

The PPP commissioners- Gunraj, Robeson Benn and Bibi Shadick- last week Friday failed in their bid to get the Commission to agree to a motion for the contentious Region Four declaration to be scrapped.

Alexander maintains that the 10 declarations are legal, and that GECOM has agreed to conduct a recount due to requests for recounts in several regions and concerns that have been raised about the transparency and credibility of the process. Alexander flayed Nandlall for relying on criticisms by observers and others of the Region Four declaration by Returning Officer,  Clairmont Mingo was flawed.

“Since when does the declaration of individuals or agencies determine legality? No court has ever pronounced on Mingo`s declaration. I hold no brief for it and was never provided an opportunity to comment on it in the normal course of proceedings at GECOM,” Alexander said.

Gunraj last week Friday said GECOM Chairman, Retired Justice Claudette Singh told the commission meeting Mingo’s declaration would not be set aside until after the recount.

GECOM is prepared to  begin the recount of the votes which is expected to take at least 25 days.