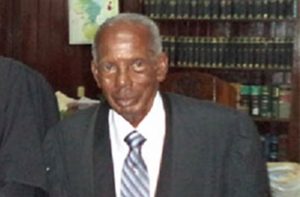 Former Chancellor of the Judiciary, Senior Counsel Keith Massiah has died, his wife confirmed on Sunday.

Massiah is survived by his wife and three children.

President David Granger, in a statement, said he  “is saddened at the death” of Massiah. He “expresses heartfelt sympathy to Mr. Massiah’s wife, Mrs. Maureen Massiah, OR, his three children, three grandchildren, other relatives and friends.”

His wife, who is a former Principal of The Bishops’ High  School, said he passed away last  Friday at about 4 PM at St. Joseph’s Mercy Hospital while waiting to see a doctor. “He died very quietly and peacefully,” she said, adding that he was in the triage area while she was making a payment and getting his file.

Mr. Massiah served as Chancellor from 1984 to 1988 and was later appointed Attorney General. “All of his service was right here in Guyana,” she said.

Mrs. Massiah recalled that her husband used his intellect to serve his community. “My husband was a man who did a lot for his community,” she said of Mr. Massiah who hailed from Pouderoyen, West Bank Demerara where a street has been named in his honour.

Senior Counsel Massiah and Mrs. Massiah were married for 46 years and together they have one daughter.

Mr. Massiah was awarded Guyana’s second highest honour — the Order of Roraima (OR) — for service of an exceptionally high quality and beyond the normal call of duty in the administration of Justice and in the field of law.