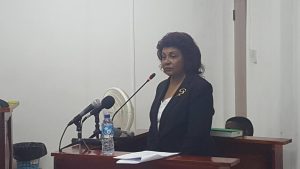 The Chairperson of the Guyana Elections Commission (GECOM), Claudette Singh says she has lodged a report with police and cybercrime investigators about a threat on her life but she says she is not afraid of death and she vowed to get the national vote recount off the ground.

“I reported it to police but also cybercrime. They have a bounty on my head from Friday night,” Singh told reporters shortly after she, other commissioners and members of the National COVID-19 Task Force toured the Arthur Chung Conference Centre where the recount of votes cast in the March 2, 2020 general elections would be conducted.

The GECOM Chairperson indicated that she was not afraid. “I am not afraid because death is inevitable and I believe in God,” she said. Singh recommitted to ensuring the more than 400,000 votes are recounted. “I am doing everything possible. I am the person who spoke about the recount. I am the person who made that commitment and I am going to see it through. I, like them, want to see it over,” she said.

The GECOM Chairperson said the start-date would depend on a decision by the Caribbean Community (CARICOM) Secretary-General, Irwin La Rocque. Election Commissioner, Vincent Alexander added that “the starting time would be adjusted with when they are able to arrive. so when they indicate to us when they will be available to arrive, that will influence the start time.”

Alexander said a draft order, which would be published in the Official Gazette, would be circulated among commissioners.

He added that one of the suggestions would be used as a “trial-run” to arrive at an estimated recount time per ballot box. He reconfirmed that Region Four would be counted simultaneously with another region, in contrast to calls by the opposition People’s Progressive Party (PPP) for Region Four to be recounted first.

He also told reporters that the recount was likely to last 10 hours each day from 8am to 6pm, now that the curfew hours have been relaxed for workers involved in the process. He said the National COVID-19 Task Force has advised that each room should not have more than 14 people at any time, have sanitising measures, and provisions must be made for proper access to specially designated washrooms for different areas of the building.

He said the 14 persons would include four persons per workstation as well as scrutineers and observers.

Alexander was optimistic that there would be sufficient projectors and other equipment, some of which would be provided by the Arthur Chung Conference Centre, for the 10 workstations. “GECOM will make every effort I understand to resource 10,” he said. 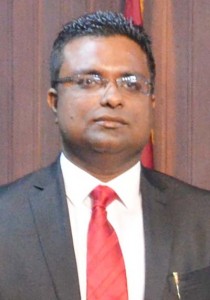 The GECOM Commissioner confirmed that the CARICOM High-Level team that would be coming to scrutinise and validate the vote count would not have to be quarantined for 14 days on arrival in Guyana because they would be tested for the coronavirus before they arrive.

PPP-aligned Elections Commissioner, Sase Gunraj, after Monday’s second site-visit at the Arthur Chung Conference Centre, insisted that more than 10 workstations could be accommodated. He stressed that there was no reason for GECOM, being an independent constitutional body, to consult with anyone before making decisions. “We had no duty or no obligation to seek guidance or clarity or permission from the COVID-19 Task Force, as it so labelled, because it was always my position that what we needed to do is to inform them of the decisions that we have taken and which we intend to implement,” Gunraj said. He charged that there was a “naked attempt” at political interference by those who are responsible for crafting policies.

At the same time, he was not opposed to CARICOM being assured of their health and safety due to the COVID-19 virus, but he was wary that that was being used to scuttle the recount of persons.

Both the PPP and A Partnership for National Unity+Alliance For Change (APNU+AFC) have claimed victory in last month’s general elections.

Previous: GECOM gets green-light to adjust recount hours, no quarantine for foreigners
Next: OPINION: Oil futures below zero; meaningless to most Guyanese