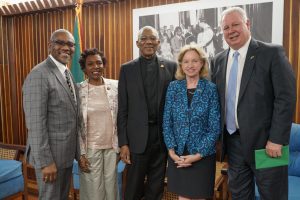 The incumbent A Partnership for National Unity+Alliance For Change (APNU+AFC) coalition administration, labelling itself as “pro-American”, is warning the United States (US) that the opposition People’s Progressive Party (PPP) poses a geopolitical and economic threat due its close ties with China, Russia and Venezuela.

“If the PPP gets control of Guyana, China and Russia will control the Northern region of South America, from Venezuela to Suriname, and natural resources far exceeding Saudi Arabia’s,” states a 147-page dossier that will be used as the basis for lobbying the US government.

In the dossier of mostly favourable press releases, newspaper articles and court documents, the APNU+AFC coalition has tasked the Washington DC-based JJ&B, LLC with telling key American politicians that the PPP engaged in directly undermining US interest by cozying up to the Venezuelan regime of Hugo Chávez and Nicolás Maduro.

“Mr. Jagdeo, the leader of the party, as President, harboured vicious drug traffickers in the region, most of whom ended up in US prisons without his cooperation,” states the dossier that will be used to target American lawmakers and other influential political policymakers on behalf of the coalition. Jagdeo had several times denied any ties to drug traffickers including Shaheed ‘Roger’ Khan who was convicted and deported last year.

The Guyana government also wants JJ&B to inform the US executive and lawmakers to soften concerns that the March 2, 2020 election results were not credible and transparent. The US has repeatedly signaled that Guyana can be punished if a government comes to power based on electoral malpractice, but Georgetown has insisted that it is a sovereign State.

Touching on Guyana’s emerging oil and gas sector, in the dossier dispatched to JJ&B, the government takes the position that the British is purportedly representing British Petroleum and Shell to “access the new oil and gas finds.”

Claiming that former President and Opposition Leader Bharrat Jagdeo has “consistently worked to undermine Exxon’s position in Guyana,” the American lobbyists are expected to tell US lawmakers and executive members that he intends to continue making Guyana an outpost for the Chinese. The documents noted that the PPP established a base for China in Guyana by gifting China 1 million hectares or 5 percent of Guyana’s territory for logging and other unauthorised business ventures including access to Guyana’s rare earth minerals and bauxite deposits.

The “PPP worked against the United States in promoting China’s interest not only in Guyana, but in the region as a whole, serving as Ambassador for China in regional forums, such as the one in September 23, 2011,” the document states. The Granger-led administration has also signed on to China’s Belt and Road Initiative in the hope of tapping support for major infrastructural projects.

As regards Russia, the dossier notes that Mr. Jagdeo was educated in Moscow and “has used his influence with Russia to serve as liaison with his decades-long friend” Venezuela’s President, Maduro. “No wonder the private jet carrying Cuban, Libyan and Russian who came to Guyana to work for the PPP during the election originated in Venezuela,” the document states.

The coalition’s lobbyists are also expected to tell American legislators that Mr Jagdeo has worked with Maduro to” undermine” President David Granger’s “effort in the current border dispute with Venezuela, choosing to deny Guyana a resolution of a dispute upon which the country’s future depends.”

The US has openly backed Guyana’s legitimate ownership of Essequibo. Both the PPP and APNU+AFC governments have agreed that border controversy must be settled by the International Court of Justice.

The lobbyists are also expected to inform American decision-makers that Jagdeo “turned a blind eye” to the extra-judicial execution of more than 400 Afro-Guyanese, a claim he has often denied.

The document also targets PPP presidential candidate Irfaan Ali, saying that as Housing Minister he had approved the sale of lands to cabinet members at below market rates. Claiming that Ali is Jagdeo’s surrogate, the dossier notes that the presidential candidate is embroiled in a controversy for allegedly falsifying applications to universities by claiming degrees he never earned.

Jagdeo, the document alleges, “amassed a fortune” of about $50 million when serving as president of poverty-stricken Guyana from 1999 to 2015.

Associates of JJ&B LLC include Trinidad and Tobago-born David Fraser who acquired Guyanese citizenship in November, 2017, and Michael Granger.

The PPP has since slammed the coalition’s document, charging that “it is nothing but a tissue of lies which descends to such levels as peddling and promoting ethnic, religious and racial hostilities.”

“We comprehensively reject this diatribe,” the PPP said, adding that it would respond in detail to the dossier to “set the public record straight.”

Director-General of the Ministry of the Presidency, Joseph Harmon defended government’s hiring of the lobbying firm, on the grounds that the administration has a duty to defend the government and Guyana.