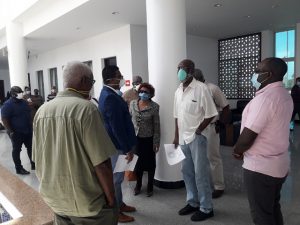 The Guyana Elections Commission (GECOM) is now tasked with determining whether to use eight, five or 20 computer workstations for a national recount of ballots cast the March general elections.

Alexander could not say how many days the recount exercise would take with his proposed eight workstations, two hours per ballot box and working hours from 9am to 5pm. He said the commission would explore working later than 5pm in light of the 6pm to 6am curfew as part of measures to curb the coronavirus, COVID-19.

He rejected the People’s Progressive Party’s (PPP)-nominated election commissioners’ proposal for 20 workstations on the basis that the use of tents in the Conference Centre compound could pose a security risk. “I have a difficulty with working in tents in the yard. I think it poses a serious security problem. It’s likely to lead us into the kind of mob behaviour that we had at Ashmin’s (building). If you use rooms, you have far more control over your operations as opposed to go(ing) into a big open courtyard where people (are)…and create the kind of confusion they have already been exposed to,” he said. The Carter Centre election observer mission is on record as saying that there were efforts by PPP/C representatives and others to disrupt the declaration of results” at the Ashmin’s Building.

The GECOM Secretariat’s latest proposal is offering five workstations in contrast to three stations that had been originally proposed, but Gunraj still feared that the recount exercise would take months as “it does not even reduce the timeline by half.”

Originally, the Chief Elections Officer had proposed three workstations and two hours to count each of the 2,339 ballot boxes which would have taken a total of 156 days. Gunraj said the recount would be done in keeping with several provisions of the Representation of the People Act as is reflected in the GECOM Secretariat’s latest proposal.