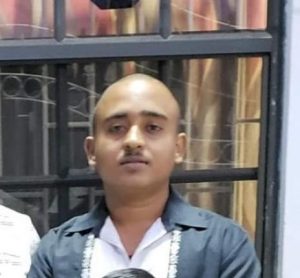 “Investigations so far revealed that the victim reportedly shot himself in the head with a handgun in the presence of his spouse and a security guard.
The victim was said to have arrived home about an hour before the incident,” the Guyana Police Force said in a statement.

Nandlall said Holladar, 26 years old, never showed any signs of mental frustration and so he was shocked at the incident. “I went over there early this morning and saw the body,” he told News-Talk Radio Guyana 103.1 FM/Demerara Waves Online News.

The People’s Progressive Party (PPP) Attorney-at-Law said Holladar’s passing would not affect the cases before the High Court. However, other legal experts said his contempt of court case against Region Four Returning Officer, Clairmont Mingo might have to be dropped but Nandlall would have to find substitute parties in the other matters.

Nandlall recalled seeing his driver late Friday afternoon and telling him that they had finished for the day and that he was free to go home. Instead, Holladar apparently returned home early Saturday morning.