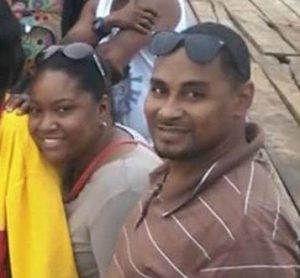 A 37-year-old woman was chopped to death with an axe at the Bartica airstrip and her husband has since been arrested with severe self-inflicted wounds, police said.

The dead woman, who was a teacher, has been identified as Natoya Speede. Her husband, who was hospitalised at the Bartica Hospital under police guard,  is Orin King.

Police have since found an axe next to King whose cut his Achilles tendon and abdomen from which part of his intestine was protruding.

The Divisional Commander said  Speede was killed in the presence of her children, 17 and 11 years, who fled the scene and informed relatives. “The children were there but they escaped in the bushes and contacted relatives,” Lord said.

The Guyana Police Force said, “Investigation revealed that the suspect took the victim and their children to the location where the incident occurred having told the family that they were going on a photo shoot but instead inflicted several wounds about the victim’s body with an axe.”