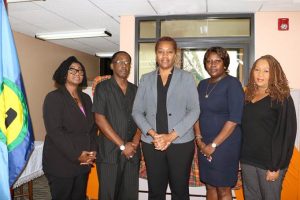 Even as the Guyana Elections Commission (GECOM) finetuned legal issues to kick-start the Caribbean Community (Caricom)-supervised recount of votes cast in general elections more than two weeks ago, the High Court on Tuesday granted an injunction blocking that exercise.

“An interim injunction is hereby granted restraining the Guyana Elections Commission from permitting or authorising any person or persons to any agreement between the President of Guyana and the Leader of the Opposition and or any agreement between the Guyana Elections Commission and the Caribbean Community or at all to count or recount any ballots cast by the electors at the March 2, 2020 general and regional elections until the hearing and review of the judicial application review filed herein,” the court document states.

Orders were also granted restraining the Chief Elections Officer Keith Lowenfield from setting aside or varying the declaration of the ten Returning Officers of the ten administrative districts and from substituting or replacing those declarations with any other documents or declarations until the judicial review is heard.

Unless the opposition People’s Progressive Party (PPP) gets the High Court to discharge the order, the Chief Elections Officer will declare all the results and issue a report to GECOM for certification. That process will pave the way for the swearing in of David Granger for a second term.

The Chief Justice, Roxane George-Wiltshire had previously blocked the Chief Elections Officer and GECOM from declaring the results unless they were properly tabulated.

Attorney-at-Law, Sanjeev Datadin said the PPP would file papers to get the High Court to discharge those orders before Friday’s hearing.

Datadin noted that the Region Four Returning Officer, Clairmont Mingo violated the judge’s orders and so he is facing contempt of court proceedings. Datadin said someone named Ulita Grace Moore secured an ex parte injunction from the High Court.

“The political process is being undermined. The same people who are in APNU or there are two factions in APNU or the President is schizophrenic. He has multiple personality disorder. Why would he make an agreement, let Caricom people come here and then go to court and get an order?” Datadin queried.

A small number of protesters began gathering outside the commission’s headquarters demanding that David Granger be sworn in for a second term.

“No president, no recount,” and “We want we president swear in now,” were among the chants by supporters of A Partnership for National Unity+Alliance For Change (APNU+AFC).

GECOM, meanwhile, issued a statement saying the seven-member decision-making body was examining the constitutional implications of an agreement between President David Granger and Opposition Leader Bharrat Jagdeo for the recount to be conducted. “The Commission is currently examining the legal ramifications of this agreement in accordance with the Constitution of Guyana,” GECOM said in a statement.

The Caricom high-level team that is expected to supervise the recount, according to GECOM, says it “is necessary for all the legal issues to be properly addressed including the gazetting of the process as requested by the high level Caricom delegation. Once finalized, the counting would commence immediately.”

The recount should have begun at 9:30am Tuesday but up until 3pm the process had not begun.

The March 2, 2020 general and regional elections have been mired in deep controversy especially over the results of Region Four. The international community and regional and international observers have all criticised the tabulation process, saying it lacked credibility and transparency.