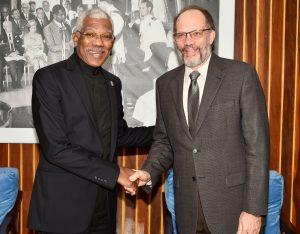 The opposition People’s Progressive Party (PPP) on Tuesday said if David Granger is sworn in as President for a second straight term under a cloud of questionable election results, his administration would be deemed “illegal and illegitimate” and will lobby the international community for sanctions.

The PPP noted that earlier Tuesday United States (US) Secretary of State, Mike Pompeo remarked about Guyana’s political situation connected to the March 2, 2020 general elections, that “it is important to note that the individuals who seek to benefit from electoral fraud and to form illegitimate governments, regimes, will be subject to a variety of serious consequences from the United States.”

Secretary Pompeo said the US was closely monitoring the tabulation of votes in Guyana. He said the US joined the Organisation of American States, Commonwealth, European Union, Caricom and “other democratic partners in calling for an accurate count.” The US Secretary of State commended Caricom’s role in “seeking a swift democratic resolution.”

The PPP said “Should there be a swearing-in on the basis of fraudulent election results, the People’s Progressive Party will treat Mr. Granger’s regime as illegal and illegitimate and will pursue the consequences addressed by Secretary Pompeo to the end, as well as sanctions for the members of the APNU+AFC Coalition, their families, their cronies, and their collaborators.”

The PPP made known its position even as the Caribbean Community (Caricom) Secretary-General, Irwin La Rocque led a five-member high-level team that should have supervised the national recount to a meeting with the Guyana Elections Commission (GECOM) indicating that they would be pulling out of Guyana. The delegation arrived at GECOM’s Headquarters at 5:31pm and left at 5:50pm.

The team, led by Dominica’s former Foreign Affairs Minister and Attorney General, Francine Baron, have aborted their mission after the High Court granted an injunction blocking an agreement between President Granger and Opposition Leader Jagdeo for a national recount of the votes cast.

Pro-coalition election commissioners, Vincent Alexander and Charles Corbin, however, ruled out GECOM certifying a report and declaration of results by the Chief Elections Officer, Keith Lowenfield because of the High Court action filed against the national recount by A Partnership for National Unity+Alliance For Change (APNU+AFC) candidate, Ulita Moore. “All actions of the Commission will now, as a consequence of that injunction, cease. We have been effectively debarred from taking any action, as I understand it, on anything relating to the process and so, as a consequence, it means that any development that could have occurred until we face the court on Friday is frozen,” Corbin said.

Moore obtained an ex parte injunction Tuesday afternoon, but PPP candidate and Attorney-at-Law, Sanjeev Datadin said his party hoped to get it thrown out before its return date on Friday.

The PPP said the injunction in Moore’s name “exposes the duplicity” of Granger and his APNU+AFC associates, after asking the Caricom Chairman, Barbados Prime Minister, Mia Mottley to send a team to oversee the recount because “he did not want to be sworn in on the basis of disputed election results”. “The global community has seen the true nature of Mr. Granger and his cabal. This is now revealed, first-hand, to the leaders of CARICOM. They, too, will not be able to recognize his illegal and illegitimate regime should he move forward to be sworn in based on fraudulent results,” the PPP said.

Criticising APNU+AFC for mobilising protesters across the country with calls against Granger to be sworn in as president, the PPP said “the truth of the results of the 2020 General and Regional Election results is in the ballot boxes. This is why the recount, specifically the recount of votes in Region 4, is being resisted.”

PPP Elections Commissioner, Sase Gunraj believed that every effort was made to thwart the work of the Caricom high-level team.

The international observers and major western nations have also warned about sanctions because the tabulation process for Region Four was not done in a credible and transparent manner, and so raised suspicions about the fairness of the general and regional elections.

The Returning Officer of Region Four, Clairmont Mingo has refused several requests for recounts of the votes cast in his region, saying no counting agent was appointed. The PPP has filed contempt of court proceedings against him, saying that he violated High Court orders laying out how the tabulation process must be conducted.