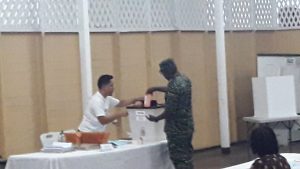 Chief-of-Staff of the Guyana Defence Force, Patrick West casting his vote at 6:15 am at Camp Ayanganna.

Early voting on Friday in Guyana’s general elections is underway by members of the disciplined services ahead of the nationally-scheduled date for polling because they will be required to maintain law and order while civilians vote on March 2 and the country awaits the results which can take as many as five days.

The Guyana Elections Commission says 10,226 personnel from the Guyana Police Force, the Guyana Defence Force and the Guyana Prison Service are eligible to cast their ballots at 86 polling stations at disciplined services locations across the country.

Friday’s polls opened at 6am and are scheduled to close at 6pm. In order to protect the secrecy of services members’ votes, their ballots will be mixed with the March 2 civilian votes, although it is generally believed that the Afro-Guyanese-dominated disciplined services usually vote overwhelmingly for the People’s National Congress Reform, the major party in the ruling coalition.

The GDF has “strictly prohibited” the media and other accredited groups from speaking with officers and soldiers while covering their balloting.

The two major political parties – the ruling A Partnership for National Unity+Alliance For Change (APNU+AFC) and the main opposition People’s Progressive Party (PPP) – have been targeting appeals to the disciplined services for their vote.

One of the major campaign platforms for the parties has been the PPP’s promise to return the one-month annual tax-free bonus to the disciplined services versus the coalition’s preference for increased salaries which would eventually result in increased pensions on retirement.

APNU+AFC and the PPP have also been pledging no political interference in running the affairs of the disciplined services.

Previous: PPP accuses GECOM of attempting to disenfranchise its supporters; calls for international help
Next: Granger wary of private residences being used as polling places