Granger wary of private residences being used as polling places 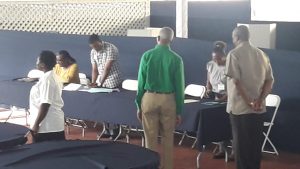 Presidential candidate for A Partnership for National Unity+Alliance For Change (APNU+AFC), David Granger on Friday said he favoured the reduction in the number of private residences being used as polling places.

Speaking with reporters less than one day after the opposition People’s Progressive Party (PPP) expressed grave concern that the Guyana Elections Commission (GECOM) had been complicit in suppressing votes from its strongholds, Granger said private residences had in the past appeared to have been skewed in favour of the opposition. “In the past when the PPP was in government, it was apparent to us in the opposition then that some of the private residences were so obscure that many of our supporters couldn’t find them and, in fact, some of them were changed at the last moment,” he said.

Granger, who is the incumbent leader, at the same time made it clear that neither his coalition nor its three elections commissioners had played any role in reducing the number of private residences to be used as polling places on March 2, 2020. “There is no attempt on the part of our commissioners or our parties to disenfranchise anyone but there were numerous abuses in the past in terms of the selection of private residences. Some of them were obscure, some of them were in houses or active political advocates and many persons not associated with the administration at that time were disenfranchised. I am very confident it will not happen. I am confident that the Elections Commission, which is in charge of elections, will make the right decision,” he said.

He said if there are any complaints they should be addressed to GECOM.

The PPP Thursday night assailed GECOM for reducing or eliminating altogether private residences in its strongholds such as Lusignan, Mon Repos and Annandale.