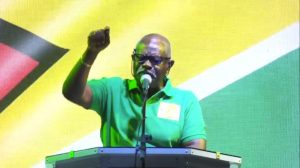 Former Commissioner of Police, Winston Felix Wednesday night boasted that since his A Partnership for National Unity+Alliance For Change (APNU+AFC) coalition came to power in 2015, there has been a 30-percent decline in serious crimes and more than 500 guns have been seized.

Felix, who is Minister of Citizenship and Immigration, rattled off the figures and other achievements in the security sector at a 2020 general election rally held at the Diamond Tarmac, East Bank Demerara. He said investments in DNA testing and gun residue equipment to the amount of GYD$110 million and six rehabilitated police stations have helped to reduce “serious” crimes from 2015 to now by 30 percent.

Police, he said, have seized 596 guns in five years, and no longer are several persons being gunned down at once. “We have seized all those firearms and hardly anyone has been killed; I think that is a remarkable record,” he said.

“Good work for the Guyana Police Force! Hail them up!” said Felix who served as Police Commissioner from 2004 to 2006 when he retired.

There are no longer human rights abuses, and if anybody risks it soon after they are charged and placed before the court,” he said in recalling that under the People’s Progressive Party (PPP), baton had been inserted in the anus of a detainee and a youth had been scalded in the crotch. The High Court had awarded GYD$6.5 million in damages to Twyon Thomas who had been burnt in his pubic area during a murder investigation.

Late last year, two policemen, who are brothers, were charged with burning a 17-year-old boy for allegedly breaking and entering their home on the West Bank Demerara. They were slapped with several related charges.

Felix assailed the then-PPP administration for presiding over an era of rampant cocaine trafficking, the February 2002 jailbreak, and massacres at Linden, Bartica and Lusignan. “When we took office in 2015, we took this nation out of fear. This nation was living in fear because the previous government mishandled the security sector,” he said.

Previous: OPINION: Oil contract: priorities were never about money, but access and security
Next: Police, residents standoff at Aroaima over removal of river blockade